Transcatheter aortic valve implantation (TAVI) procedures are increasingly being performed under local anaesthetic, generally with sedation. Operators hope this will reduce mortality, morbidity and length of hospital stay. A general anaesthetic (GA), however, although involving intrinsic risk, permits transoesophageal echocardiogram (TOE) imaging throughout a procedure as well as eliminating patient anxiety, pain and movement. This article reviews the published literature, all single-centre experiences, comparing TAVI procedures performed with and without a GA. Procedures performed without GA are generally shorter with reduced length of stay compared with those performed under GA. There is no evidence of any difference in outcomes.

The main advantages of transcatheter aortic valve implantation (TAVI) over conventional aortic valve replacement (cAVR) surgery are the avoidance of sternotomy, heart lung bypass and prolonged procedure times. These advantages facilitate early mobilisation and discharge – important both clinically and in terms of resource utilisation. Balanced against this, TAVI is less predictable than cAVR – evidenced by valve embolisation, the requirement for implantation of more than one prosthesis and conversion to cAVR – and there is a higher rate of significant aortic regurgitation post-procedure.1,2

While technical advances in valve and delivery system design are reducing unpredictability and residual aortic regurgitation, TAVI operators are increasingly trying to reduce the invasiveness to further reduce procedural mortality and morbidity, and length of stay. Key elements in this are the move from surgical cut down to the use of percutaneous closure devices for vascular access and from general anaesthetic (GA) to local anaesthetic (LA) with sedation.

Most centres when starting TAVI programmes perform procedures under GA. The primary advantage of GA is the ability to have a transoesophageal echocardiogram (TOE) probe in place throughout the procedure. The TOE probe is useful for allowing early recognition of complications, for positioning the prosthesis and for the assessment of residual aortic regurgitation. In addition, a GA eliminates patient discomfort, anxiety and movement during the procedure. However, a GA involves intrinsic risk in the form of haemodynamic instability and the need for intubation and ventilation.

Intuitively one would expect patients undergoing TAVI under LA to have a shorter recovery period post-procedure, to mobilise earlier and have a shorter length of stay as compared with those patients undergoing the procedure under GA. Published data comparing TAVI under GA and LA are few and far between, perhaps because TAVI is a relatively new procedure, but it may also be that many centres regard the superiority of LA as self-evident. However, before there is a general shift over to LA, it is important that we are sure the proposed advantages of LA are not offset by higher incidence of aortic regurgitation, prolonged screening times, higher contrast loads and procedural complications relating to patient movement.

This paper reviews the currently available literature. Key data are documented in Table 1. For the sake of brevity, procedures not performed under a GA are referred to as LA procedures. In general, however, as well as local anaesthetic agents being used at access sites, a combination of opiates (often remifentanil) and benzodiazepines are used for the purposes of sedation. Additionally, regional anaesthesia (e.g. epidural) is used in some cases.

A single meta-analysis3 including seven studies4–10 has recently been published by Fröhlich et al. They found that procedures performed under LA were significantly shorter than those performed under GA, and that length of stay was shorter. No other differences in procedures or outcomes were demonstrated, perhaps reflecting the absence of randomised studies as well as the marked heterogeneity of the included studies.

Other than this meta-analysis, published data about TAVI under LA are limited to single-centre experiences. Publications can loosely be divided into two categories. Firstly, there are registries of cases performed under LA where outcome data are compared with those from other published studies in which GA is used in all or the majority of cases. These studies are not included in the meta-analysis. Secondly, there are papers where cases performed in the single centre under both LA and GA are compared directly. 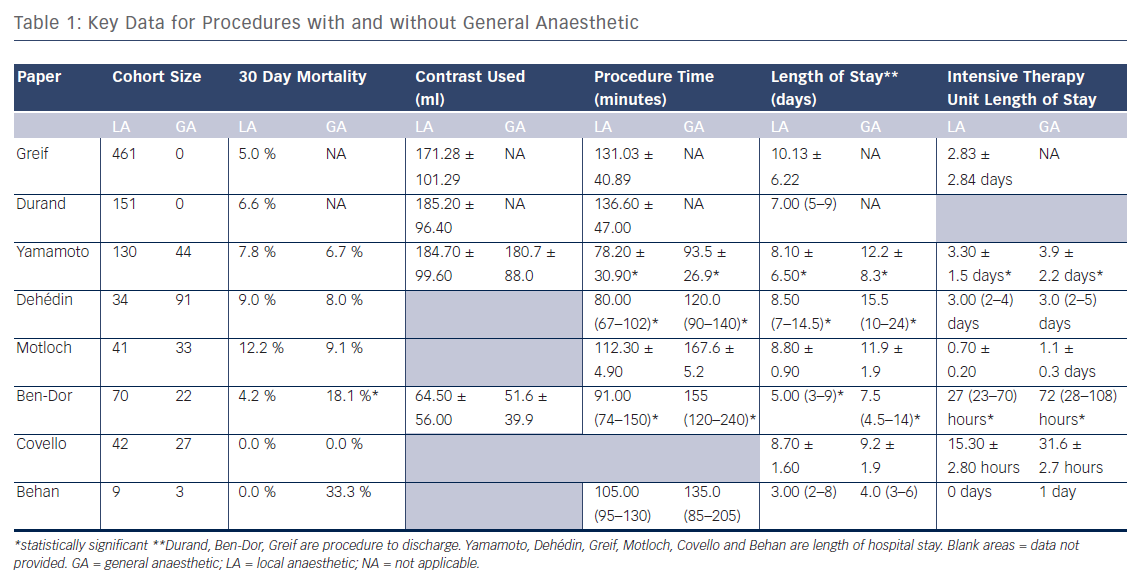 In the former group, Greif et al have published their experience of a large cohort (n=461) of patients from a single centre using both Sapien and CoreValve prostheses where LA is the default for transfemoral procedures. They have provided detailed procedural information including X-ray duration, procedure duration, volume of contrast used, inotrope requirement and rates of conversion to GA, as well as standard outcomes such as degree of aortic regurgitation, vascular complications, length of stay and mortality. They have gone on to compare their outcomes with those from other studies including Placement of aortic transcatheter valves (PARTNER) A&B,1,2 the German Aortic Valve Registry (GARY)12 and the French Aortic National CoreValve and Edwards (France 2) Registry,13 and have demonstrated similar rates of death, stroke and vascular complications. Durand et al.14 published their single-centre experience of 151 Sapien and Sapien XT cases in 2012, again documenting detailed procedural information as well as standard outcomes that are compared with those from other studies including PARTNER,1,2 the SAPIEN Aortic Bioprosthesis European Outcome (SOURCE) registry15 and Vancouver TF.16 This latter paper by Durand et al. confirms that both surgical cut down to the femoral artery and the use of percutaneous closure devices are compatible with the use of LA; all cases using the Sapien prosthesis involved surgical cut down whereas a Prostar closure device was used in 97 % of cases involving the Sapien XT prosthesis.

These two papers provide indirect evidence of the efficacy and safety of TAVI procedures performed under LA in a total of over 600 patients. They also document the important procedural data points that are required to make useful comparisons between the two types of anaesthesia.

In the second group of papers there is direct comparison between procedures performed under LA and GA within the same institution. The earliest and smallest study by Behan et al.4 was published in 2008. Twelve consecutive patients undergoing CoreValve procedures were included – nine under LA and three under GA. Not surprisingly, there were no differences between the groups characteristics or outcomes, but they documented one conversion from LA to GA and one death (from respiratory failure) in the GA group. Dehédin et al.5 compare their experience with TAVI under GA (n=91) and under LA (n=34) after a decision was made in March 2010 that LA should be the default for transfemoral procedures. Importantly, preoperative characteristics were similar in both groups, but LA was associated with shorter procedures, shorter length of stay and lower rates of inotrope requirement. Motloch et al.6 have presented their experience with general and LA in an institution where an individualised decision is made. As one might expect, patients undergoing TAVI under LA had higher STS scores and they were also more likely to present with pulmonary hypertension and renal impairment. Despite these adverse factors, procedures under LA were shorter, inotropes were used less commonly and patients mobilised earlier. There were no differences in outcomes or complication rates, although numbers were small (GA 33, LA 41). Intermediate between Dehédin and Motloch, Yamamoto et al.7 report their experience where initially GA (n=44) was generally used but with increasing experience the majority of transfemoral TAVI procedures were performed under LA (n=130). Procedures under LA were associated with shorter ITU and total length of stay. Conversion from local to general anaesthetic occurred in 4.6 % of cases; Durand et al. quote a figure of 3.3 % for conversion to GA, and in both cohorts conversion followed major complications such as tamponade, cardiac arrest, annular and vascular rupture. Ben-Dor et al.8 had an 11 % conversion rate in a cohort of 92 Sapien procedures, of whom 76 % were performed under LA. They noted higher logistic EuroSCORE and a higher incidence of previous stroke in those undergoing procedures under LA. Surgical cut down was less common under LA and procedure duration shorter. In the meta-analysis by Fröhlich et al. the overall rate of conversion from LA to GA was 6.3 %.

Further information about TAVI under LA is indirectly provided by studies assessing non-femoral access routes. Azmoun et al. sup>17 have reported promising outcomes in a small (n=19) cohort of high-risk patients undergoing TAVI via the carotid artery under LA. Petronio et al.18 have reported outcomes in a cohort of procedures performed via the subclavian artery. LA was used with increasing frequency as operators became more familiar with the procedure and this shift in practice was not associated with any change in outcomes.

In summary, the use of LA for TAVI procedures has the potential to significantly reduce resource consumption. The available data consistently supports this and there has been no suggestion that this comes at the price of unfavourable outcomes. Data, however, are few and far between, largely single-centre and all registry (nonrandomised) based, with all the problems inherent in these sorts of publications. Although a dedicated randomised trial seems unlikely, data from national databases and subgroup analyses of international randomised trials should provide sufficient information for TAVI operators to decide if LA should be the default for the relevant access routes and, if this is the case, who are the exceptions where a GA is required.