Many patients have now been able to receive transcatheter aortic valve replacement (TAVR) therapy for severe aortic stenosis. These patients have atrial fibrillation and are placed on warfarin for stroke prophylaxis. The opportunity for treatment with left atrial appendage occlusion (LAAO) in place of warfarin for this population exists, especially for those with increased bleeding risk. This paper discusses the prevalence and aetiology of stroke in patients presenting for TAVR (with a focus on the risk from chronic and acute atrial fibrillation) and also the benefit of LAAO closure in this population.

The patients under discussion are those with aortic stenosis who are at risk for stroke due to atrial fibrillation. The Placement of Aortic Transcatheter Valves (PARTNER) trial reported one-year stroke data as 8.3 % in cohort A (high-risk operable) patients1 and 10.6 % in cohort B (non-operable) patients.2 Other registry data show that 30-day stroke risk was present in multiple registries (periprocedural stroke risk of 1.5 %, 30-day stroke rate of 4.0 %, with 30-day major stroke risk of 3.2 % and 30-day minor stroke risk of 1.0 %).3,4 Yet other studies indicate that roughly half of strokes within the first 30 days will be periprocedural, and half will be after the procedure.5–7

Why Does Stroke Happen After Transcatheter Aortic Valve Replacement?
There are many theories addressing this question, as captured in Table 1. These include procedural risk factors and post-procedural risk factors. Some procedural risk factors are known from experience with balloon valvuloplasty, but some are specific to valves. Serial transcranial Doppler examinations identify high-intensity transient signals (HITS) during transcatheter aortic valve implantation (TAVI), which may serve as a surrogate for microembolization.8–10 For example, duration of valve manipulation may be longer and lead to more HITS with self-expanding CoreValve than balloon-expandable Edwards. Of note, atrial fibrillation – both new onset and chronic – are risk factors for stroke in patients with TAVR. These theories and risk factors give rise to additional questions.

How Often is Atrial Fibrillation Present in Patients Undergoing Transcatheter Aortic Valve Replacement?
Chronic atrial fibrillation was present at a high rate in both the PARTNER cohort A: high-risk TAVR arm (40.8 %) and cohort B: inoperable TAVR arm (32.9 %). Further analysis of TAVR patients found that atrial fibrillation is a predictor of mortality regardless of type (paroxysmal, persistent or permanent). Atrial fibrillation also predicts mortality regardless of subclass (age, gender, diabetes, renal function, coronary artery disease or left ventricular ejection fraction).15 Further, pre-existing chronic atrial fibrillation was found in one study to predict stroke even after 30 days, with a hazard ratio of 2.84 and a cumulative transient ischaemic attack (TIA)/CVA hazard ratio of 1.91.5 However, this was not the case in other papers, namely by Stortecky et al.,15 likely due to two reasons. Firstly, these studies do not differentiate strokes at >24 hours to later strokes. Secondly, they do not differentiate strokes from 30 days to one-year as a different subgroup. Timing of the cerebrovascular event may be relevant to the cause.

Does New Onset Atrial Fibrillation After Transcatheter Aortic Valve Replacement Lead to Stroke?
There is evidence of a significant correlation. In 2012, Nombela- Franco et al.5 showed how new onset atrial fibrillation with onset of <24 hours, 0–30 days and 1–30 days after TAVR has an odds ratio for stroke of 2.46, 2.27 and 2.76, respectively. According to another paper, new onset atrial fibrillation in the first year after procedure has an odds ratio for stroke of 4.3.16

Rodés-Cabau et al.17 analysed the evidence behind anticoagulation for patients with atrial fibrillation undergoing TAVR. They found that there was a “lack of uniformity regarding the choice of postprocedural antithrombotic treatment”. This was reflected in a German registry paper of 1,450 patients showing that 7 % of patients received aspirin and clopidogrel monotherapy, 11 % received aspirin or clopidogrel with an oral anticoagulant, 66 % of patients received dual antiplatelet therapy, and 16 % received triple therapy with aspirin, clopidogrel and an oral anticoagulant. The triple therapy was associated with an increased risk of composite of death, stroke, embolism or major bleeding (adjusted odds ratio 1.78, 95 % confidence interval [CI] 1.1– 2.9).20 It therefore seems that for patients with chronic atrial fibrillation who have received TAVR, the use of warfarin with dual antiplatelet therapy is associated with increased risk of bleeding. 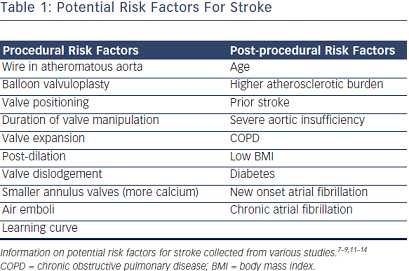 Warfarin and Newer Anticoagulants
As mentioned earlier, warfarin has been used for TAVR patients in the setting of atrial fibrillation. However, this comes with multiple issues. The first is a high risk of bleeding complications,21 both major and minor. In addition, there are issues of compliance. Some studies have shown that only a third of all patients are eligible for warfarin, are taking warfarin in the community non-trial setting.22 Finally, the amount of time that patients taking warfarin in clinical trials with therapeutic international normalised ratio (INR) has been less than ideal, up to 38.7 % of the time. In a real-life study, patients had non-therapeutic INR up to 50 % of the time.23,24

New anticoagulants, such as dabigatran, rivaroxaban and apixaban, provide great promise for stroke prophylaxis in patients with atrial fibrillation. These medications operate through mechanisms other than vitamin K antagonism, including oral direct thrombin inhibitor (dabigatran) and oral direct factor Xa inhibitor (rivaroxaban and apixaban). While the new medications were likely to decrease haemorrhagic stroke in published studies, they all are associated with an increase in major bleeding. In addition, they all have discontinuation rates of more than 20 % in a heavily controlled clinical trial setting.25– 27 Causes for discontinuation include interactions with drugs, interactions with diet, polypharmacy, side effects, cost, nuisance bleeding or need for an invasive procedure. There has been no data looking at newer anticoagulants for chronic atrial fibrillation in patients after TAVR; however, the increased risk of bleeding and high non-compliance rate would be issues also applicable to this population.

Left Atrial Appendage Closure
There have been multiple studies showing the benefit of LAA closure. The Watchman™ device (Boston Scientific, Natick MA, US) has significant positive data. Early issues of safety and treatment failures were addressed with continued access registry, late versus early analysis with Watchman Left Atrial Appendage System for Embolic Protection in Patients With AF (PROTECT-AF), and the second randomised controlled Randomized Trial of LAA Closure vs Warfarin for Stroke/ Thromboembolic Prevention in Patients with Non-valvular Atrial Fibrillation (PREVAIL) trial, which all showed increasing rates of implant success with decreasing rates of vascular complications and pericardial effusions needing intervention.28 In addition, the four-year analysis of the PROTECT-AF trial showed that LAA closure was superior to warfarin, specifically in the area of all-cause mortality.29 Finally, LAA occlusion was found to be effective in patients with contraindication to warfarin,30 tolerant of small peri-device leaks,31 cost- effective32 and correlated with an improvement in quality of life.33 The Amplatzer™ Cardiac Plug (ACP) system (St. Jude Medical, St. Paul, Minnesota, US) also has significant long-term safety and efficacy data.34–37

According to the European Society of Cardiology (ESC) 2012 Valvular Heart Disease Guidelines, “It is conventional to divide AF into cases which are described as ‘valvular’ or ‘non-valvular’. No satisfactory or uniform definition of these terms exists. In this guideline, the term valvular AF is used to imply that AF is related to rheumatic valvular disease (pre-dominantly mitral stenosis) or prosthetic heart valves”.

Atrial Fibrillation and Valvular Heart Disease
Do patients with degenerative aortic stenosis treated with TAVR still count as patients with ’valvular heart disease’? There is evidence to say that this may not be the case.

Finally, not all prosthetic valves are alike. Compared with mechanical valves, bioprosthetic valves have a lower risk of stroke, as low as 1.3 ± 0.3 %.40 With a different stroke rate, there is even more evidence that the valve replacement type plays a significant role in the overall anticoagulation strategy.

How Will Left Atrial Appendage Closure Decrease the Stroke Risk in Transcatheter Aortic Valve Replacement?
There are four main areas where there is risk of stroke in patients undergoing TAVR. These include:

For the TAVR procedural risk, LAA closure does not have a significant impact. This may account to 50 % of strokes that happen in the first 30 days, as these occur in the first 24 hours. All steps of the procedure add to the risk, especially valve advancement and positioning.8 The key to success here may be smaller sheaths, better delivery systems and easier to position valves. Carotid protection systems may also provide a reduction in risk, but this has not yet been proven. In fact, placement of the carotid protection system can lead to an embolic risk or interference with the TAVI valve delivery system.7

The risk of thrombus on the valve is difficult to estimate. The guidelines therefore point to aspirin (indefinitely) and clopidogrel (1–6 months), as listed in the ACCF/AATS/SCAI/STS guidelines41 and the CCS guidelines.19 Use of LAA closure to replace warfarin is not likely to change this risk, and dual antiplatelet strategy should be continued.

LAA closure is therefore only likely to help decrease part of the overall stroke risk for these patients, but may help in patients with atrial fibrillation, where the risk of stroke from the LAA is increased.

Among Patients Receiving Transcatheter Aortic Valve Replacement, Who Are the Best Candidates for Left Atrial Appendage Occlusion?
The best candidates for LAA occlusion with TAVR are those with chronic atrial fibrillation and established contraindications to anticoagulation or a high bleeding risk (i.e. for both warfarin-ineligible and warfarin-eligible patients). Many patients who are candidates for TAVR have a high bleeding risk and are often withheld warfarin, making them preferential candidates for LAA occlusion.42 Other candidates include those patients with a high risk of drug–drug interaction or warfarin non-compliance. Patients with coronary artery stenting that need dual antiplatelet therapy also benefit from being off warfarin and being treated with LAA occlusion; this removes the risk of prolonged anticoagulation and/or triple therapy.

Patients that have to take warfarin for other reasons should not be candidates for LAA occlusion (e.g. patients with pulmonary embolism, deep vein thrombosis or haematological abnormality).

When should LAA closure happen? There is evidence that this can be done in the same setting as TAVR, as reported in 10 % of patients in a case series published by Nietlispach et al.43 Multiple case reports have also demonstrated safety of TAVR immediately followed by LAA occlusion.44–46 This takes advantage of transoesophageal guidance (and if used, general anaesthesia) for both procedures. In addition, the patients may be able to tolerate a LAA occlusion complication (e.g. embolisation45 and tamponade) if the aortic valve obstruction has been treated prior (personal communication, Fabien Nietlispach, 10 April 2014). Other centres have performed TAVI first with LAA occlusion to follow.47

In the case of chronic atrial fibrillation, the TAVR should be performed first as this is the more clinically important intervention. In addition, there is no evidence to show that LAA closure will change the procedural stroke rate. LAA closure may take place immediately or early within the first month after TAVR to prevent intermediate and late stroke. For centres that plan to do both in the same setting, this requires careful patient selection, planning and operator experience. In this case, the dual antiplatelet therapy that is used for TAVR may also be used for post-LAA occlusion management.