Hypertrophic cardiomyopathy (HCM) is an inherited myocardial disorder characterised by left ventricular hypertrophy. A subgroup of patients develops limiting symptoms in association with left ventricular outflow tract obstruction (LVOTO). Current international guidelines recommend that symptomatic patients are initially treated by alleviating exacerbating factors and negatively inotropic medication. Drug-refractory symptoms require a comprehensive evaluation of the mechanism of LVOTO and review by a multidisciplinary team to consider the relative merits of myectomy, alcohol septal ablation (ASA) and pacing. This article provides a brief overview of HCM and the pathophysiology of LVOTO, and reviews the use of ASA in patients with drug-refractory symptoms secondary to LVOTO.

Hypertrophic cardiomyopathy (HCM) is a genetic disorder of cardiac muscle with a heterogeneous clinical course.1 The disease is clinically characterised by left ventricular hypertrophy (LVH), which is typically asymmetric, and a subgroup of patients have left ventricular outflow tract obstruction (LVOTO) caused by systolic anterior motion (SAM) of the mitral valve leaflet(s).2,3 LVOTO is often associated with limiting cardiovascular symptoms and a worse prognosis.4–8

This article provides a brief overview of HCM and the pathophysiology of LVOTO, and reviews the use of alcohol septal ablation (ASA) for the treatment drug-refractory symptoms secondary to LVOTO.

Hypertrophic Cardiomyopathy Diagnostic Criteria
HCM is defined by the presence of LVH (left ventricular wall thickness ≥15 mm in a single myocardial segment) in the absence of systemic hypertension, congenital heart disease and valve lesions of sufficient severity to explain the observed degree of hypertrophy.1,9 In first-degree relatives who have inherited a disease-causing mutation, lesser degrees of LVH are sufficient to make the diagnosis.10,11 The diagnosis is reached by integrating clinical and imaging data from echocardiography and increasingly cardiac magnetic resonance (CMR) imaging.

Epidemiology
The prevalence of HCM ranges from 0.02 % to 0.23 %, depending on the characteristics of the study population and methodology used.12–20

Aetiology
In adults, HCM is primarily inherited in an autosomal dominant manner and is caused by mutations in cardiac sarcomere protein genes.21–23 Mutations in these genes can be found in ~60 % of patients with HCM,21–23 and the majority involve cardiac myosin binding protein-C (MYBPC3) and cardiac myosin heavy chain (MYH7).24 There is a poor correlation between genotype and phenotype.25,26

A characteristic feature of LVOTO is that the severity of the obstruction is dynamic and subject to prevailing haemodynamic conditions. LVOTO is exacerbated by conditions causing reduced preload (e.g. Valsalva, squat to stand), reduced afterload (e.g. vasodilators) or positive inotropes.3 Notably, although LVOTO is most often seen in HCM, it may also occur in other conditions or physiological states and is not pathognomonic of HCM.34,35 In a smaller subgroup of HCM patients, obstruction can develop at the mid-left ventricular cavity. Mid-cavity obstruction is caused by the systolic apposition of hypertrophied mid-ventricular segments and/or papillary muscles creating a characteristic hour-glass appearance with a distinct apical cavity.36,37 This form of obstruction is often associated with apical aneurysm formation.36,37 Mid-cavity obstruction can exist in isolation (see Figure 2) or in conjunction with LVOTO. Even though ASA has been used in the treatment of mid-cavity obstruction,38,39 this is not routine practice and further discussion is beyond the scope of this review.

Assessment of Left Ventricular Outflow Tract Obstruction
All patients with HCM should undergo a detailed transthoracic echocardiogram to examine:

If the transthoracic echocardiogram fails to provide the necessary diagnostic information, a transoesophageal echocardiogram, CMR or an invasive haemodynamic study may be required.

An instantaneous Doppler LVOT gradient of ≥30 mmHg is considered significant, and such patients are classified as having the obstructive form of the disease. However, LVOTO is considered to be haemodynamically significant only when the LVOT gradient is ≥50 mmHg.3 There are few data to support these thresholds,3 which are largely empirically defined and reflect an understanding that when LVOTO is mild, therapeutic reduction of LVOTO is less likely to improve symptoms, and alternative causes of severe symptoms should be sought. 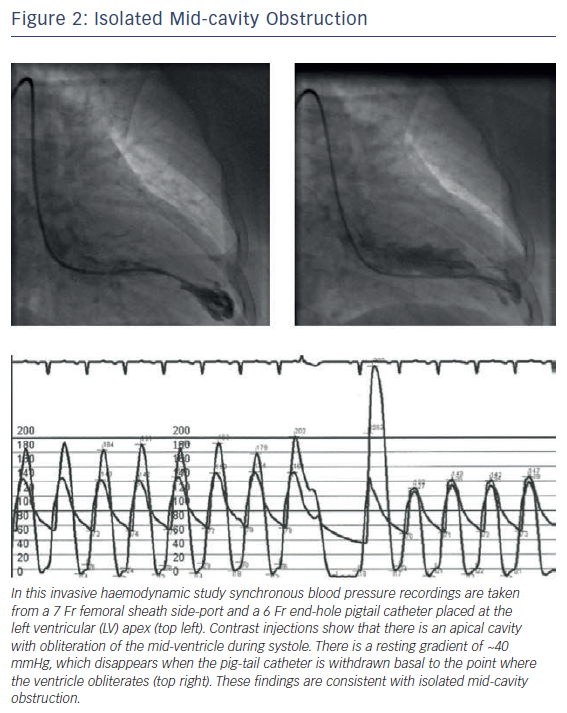 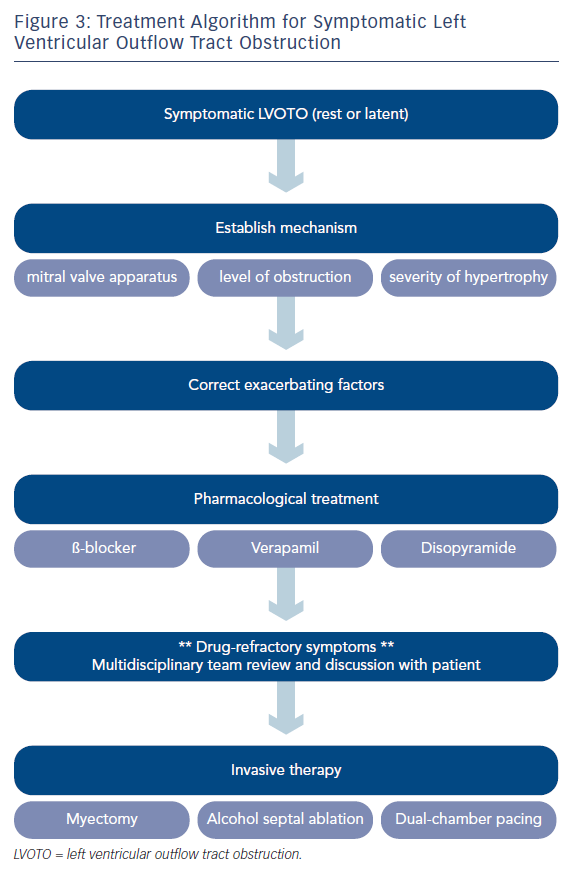 Since LVOTO is dynamic, obstruction may not be apparent in the supine patient under resting conditions. Exercise, the Valsalva manoeuvre, postural changes or an isoprenaline infusion help demonstrate latent LVOTO.6,40–42 These additional tests are mandatory in the evaluation of patients with symptoms suggestive of obstruction, which is not demonstrable at rest.

Treatment of Symptomatic Left Ventricular Outflow Tract Obstruction
Currently, there is no evidence that asymptomatic patients with LVOTO benefit from treatment to reduce the severity of obstruction; treatment is reserved for patients with LVOTO and drug-refractory symptoms.43,44 A contemporary treatment algorithm for symptomatic patients with LVOTO is summarised in Figure 3. The first-line treatment for symptoms associated with LVOTO is correction of exacerbating factors (e.g. vasodilating antihypertensives, anaemia) followed by pharmacological therapy with β-blockers, verapamil and disopyramide, which modulate the dynamic physiology of obstruction through their negative inotropic and chronotropic effects.43–46 In patients with drug-refractory symptoms or unacceptable side effects, invasive treatments should be considered by a multidisciplinary team following a comprehensive evaluation of the mechanism of obstruction:

ASA is currently the most frequently used invasive therapy, and while it is efficacious, relatively safe and minimally invasive, outcomes from randomised trials comparing different invasive techniques are not yet available. Several experienced opinions still regard surgical treatment as the ‘gold standard’.43,44 Currently, patients must be counselled that choices between ASA, surgery and pacing are made on the basis of considerations other than proven differences in outcome.

In general, ASA may be unsuitable in the presence of co-existing mid-cavity obstruction and/or intrinsic mitral valve disease; in such cases a surgical approach should be considered. Septal reduction either by ASA or myectomy when the septal wall thickness is <15 mm at the site of mitral contact is also challenging, and alternatives such as mitral valve repair/replacement or AV sequential pacing should be considered. AV sequential pacing can also be useful in selected patients where aggressive pharmacological treatment with a β-blocker, verapamil and disopyramide is contemplated, and in patients too frail to tolerate more invasive treatment. In others, pacing may be considered as an initial therapeutic trial before progression to more invasive treatment. This may include individuals with conventional indicators for device therapy (including pacing and defibrillator treatment) and patients at high risk of developing heart block following invasive treatment. Patient preference is also a key factor in decision-making.

Alcohol Septal Ablation – Procedural Aspects
The essential components of this percutaneous procedure include the identification of an appropriate septal perforator artery, its isolation from the rest of the coronary circulation and the selective injection of alcohol into this artery. The first septal artery is usually selected and a short over-the-wire balloon inflated within the artery. The balloon’s lumen allows selective delivery of angiographic contrast, echo contrast and ultimately, alcohol into the septal artery. Angiographic contrast ensures that the septal artery is isolated from the left anterior descending (LAD) by the inflated balloon, and echo contrast confirms that the myocardial volume subtended by the selected septal artery is an appropriate target for ablation.63–65 The proximal septal vessels may also supply the right ventricular free wall, LV apex and papillary muscles, and several echocardiographic views are needed to ensure contrast enhancement is confined to the target area; the appropriate target lies adjacent to the point of mitral-septal contact. If echo contrast does not localise to the target area, other septal arteries should be selectively assessed. A temporary pacing wire is inserted prior to the injection of alcohol in case significant bradyarrhythmias follow conduction system damage. Right bundle branch block is observed in approximately 50 % of cases.66 Adequate analgesia is provided and the alcohol is slowly injected to chemically ablate and infarct the target myocardium.67 Approximately 0.1 ml of ethanol (concentration >95 %) per 1 mm of thickness of the target myocardium is injected slowly (1 ml/minute).64 The balloon remains inflated for 5–10 minutes postethanol injection to prevent reflux in the anterior descending and to enhance delivery at the target myocardium. LVOTO is often reduced or abolished at the end of the procedure; this acute effect reflects septal stunning, and the LVOT gradient may again increase in the days following the procedure, to fall again over a period of weeks as septal remodelling occurs and a small scar develops in place of the ablated myocardium. The femoral or radial approach can be used.68 Important procedural steps are shown in Figure 4.

Acute Complications of Alcohol Septal Ablation
Since its inception in 1995,55 ASA has evolved and the routine use of echo contrast to select the target septal artery has made the procedure safer and more effective.63–65 In addition to complications arising from the injection of alcohol, ASA is also associated with the complications of percutaneous coronary intervention and temporary wire insertion:

Despite these potential complications, ASA remains a relatively safe procedure with in-hospital death rates of around 1 %.69,75

Post-operative Care
Patients should have a temporary pacing wire in situ with cardiac monitoring for 24–48 hours after the procedure, as they are at risk of arrhythmias. High-grade AV block resolves in the majority of cases within three days.76 On discharge, patients should be advised to report arrhythmic symptoms as rarely new onset bradyarrhythmias develop late after the procedure.77 Cardiac biomarkers peak at 12 hours post-ASA and correlate with the size of myocardial injury.78 In the absence of new conduction abnormalities, pharmacotherapy for symptomatic LVOTO should continue until a clinical review in 3–6 months, and can then be tapered if symptoms have improved.

Long and Medium-term Outcomes– Alcohol Septal Ablation Versus Myectomy
Mortality associated with ASA and surgical myectomy has been examined and compared in four meta-analyses.74,79–81 Even though the meta-analyses included individual studies with very different inclusion criteria, they have consistently shown that the two procedures have similar survival outcomes (see Table 1). Both septal reduction therapies achieve similar improvements in symptoms, which is the principal aim of invasive therapy. However, myectomy is associated with a greater reduction in gradients and reduced need for post-procedural anti-bradycardia pacing (see Table 2).74,79–81 Concerns over the long term arrhythmogenic potential of the myocardial scar induced by alcohol septal ablation67 are not supported by observational data of implantable cardioverter defibrillator (ICD) recipients undergoing the procedure82 or mortality data from the meta-analyses.74,79– 81

Procedural Failure
ASA is effective at reducing symptoms in more than 85 % of patients.69 In cases of procedural failure, defined by the persistence of both symptoms and LVOTO (rest or latent), further intervention with any of the modalities may be considered following a repeat assessment of the mechanisms responsible for symptoms. As changes in LV morphology following ASA may be delayed, it is prudent to delay decisions regarding further intervention for 3–6 months.83

Significant symptoms may persist in about 10–20 % of patients despite LVOTO abolition, illustrating the importance of the complexity of the disease and appropriate patient selection. It is therefore important to counsel patients that LVOTO reduction does not cure HCM and ongoing care will be required to monitor and treat their disease.

Alternative Percutaneous Septal Reduction Therapies
Alternative approaches to reduce hypertrophy at the point of mitral-septal contact by means other than alcohol have been investigated:

Experience with these alternatives is limited and long-term safety data are not available.

Care Beyond Left Ventricular Outflow Tract Obstruction
LVOTO should not overshadow other aspects of management; patients in whom LVOTO is successfully abolished are still subject to other HCM-related risks and outcomes. HCM should be evaluated in units with relevant expertise to address family screening and genetic testing, the risk of sudden cardiac death, atrial arrhythmias and prevention of stroke.

Conclusion
LVOTO is associated with significant morbidity and mortality. In patients with LVOTO and drug-refractory symptoms, invasive treatment should be considered following a multidisciplinary team review. The choice of invasive therapy depends not only on disease-specific characteristics but also patient preference. Contrast echocardiography-guided ASA is a safe and effective modality, which will improve symptoms in the majority of patients.