Percutaneous recanalisation of coronary chronic total occlusions (CTOs) has proved an efficient and safe treatment option with steadily ascending success rates, especially since the advent and constant refinement of the retrograde approach. Uptake remains low, even though experienced operators have in the last five years reached an unprecedented maturity level, producing success rates in the range of 90 %, clearly comparable to non-occlusive coronary artery disease treatment. Antegrade and retrograde techniques are currently considered complementary components of a CTO procedure, rather than discrete treatment strategies. We report on the case of a successful CTO recanalisation procedure on a young patient with two chronically occluded coronary arteries and a large ischaemic burden. Both CTOs were addressed in the same session employing a range of dedicated CTO recanalisation techniques, without compromising on safety issues related to contrast dye consumption and radiation exposure. A novel drug-eluting stent (DES) with biodegradable polymer was used to treat the lesions.

Coronary chronic total occlusions (CTOs) are identified in up to one-third of all patients referred for diagnostic coronary angiography,1 with an incidence increasing with age.2 CTOs still represent the most technically challenging lesion subset that interventional cardiologists face. The benefits of successful CTO recanalisation are related to improved survival,3,4 most notably in patients with a large ischaemic burden (>10 %),5 improvement in anginal status6 and left ventricular function,7 decreased need for coronary artery bypass grafting (CABG) surgery, and increased exercise tolerance.8,9 Yet, no more than 10 % of all CTOs have been treated with percutaneous techniques over a long period of time.10

We present the case of a patient with a large ischaemic burden and two chronically occluded coronary arteries that were successfully addressed in the same session, practising the whole spectrum of CTO revascularisation techniques.

A 56-year old male with hypertension, hyperlipidaemia and mild impairment of renal function presented with Class III angina (Canadian Cardiovascular Society Classification). He had no history of myocardial infarction. He underwent myocardial scintigraphy that was positive for provocable ischaemia and revealed a high percentage of myocardium at risk (>25 %). Following that, he underwent a diagnostic coronary angiography (see Figure 1) that revealed an occluded left anterior descending (LAD) artery at its proximal and mid-segment after the take-off of a big first septal branch. The left circumflex (LCx) coronary artery had mild wall irregularities at its mid-segment. The right coronary artery (RCA) was proximally occluded and was well collateralised from the first diagonal branch (D1) with collateral channels grade 2 (CC2).14 The ejection fraction (EF) was 65 % and there were no segmental wall motion abnormalities. Due to the high percentage of myocardium at risk and the presence of two CTOs, CABG was proposed to the patient as the best therapeutic option. The patient refused surgery and, in view of his young age, was then considered for percutaneous recanalisation of his occluded coronary arteries.

The LAD was treated first. The lesion was initially approached with a Fielder FC guidewire (Asahi Intecc, Aichi, Japan) supported by a Finecross™ microcatheter (Terumo Interventional Systems, Somerset, New Jersey, US). The Fielder FC wire was advanced at the subintimal space and was unable to be connected with the distal true lumen (see Figure 2A). Next, we proceeded with the parallel wire technique with the use of a Pilot 150 guidewire (Abbott Vascular, Santa Clara, CA, US). This wire punctured the proximal cap at a different position and was easily advanced to the distal true lumen (see Figure 2B). Subsequently, the Finecross was advanced through the occlusion and the Pilot 150 was exchanged to a Runthrough™ guidewire (Terumo Interventional Systems, Somerset, New Jersey, US). The occlusion was initially predilated with an Invader™ CTO 1.25x20 mm balloon (Alvimedica Medical Technologies, Turkey) (see Figure 2C). Further predilatation was performed with an Invader 2.5x15 mm balloon (see Figure 2D). The occlusion was then stented with implantation of a CORACTO™ 3.0x17 mm (Alvimedica Medical Technologies, Turkey) distally and a CORACTO 3.0x28 mm proximally, without covering the ostium of the first septal branch (see Figures 2E/F). After stent implantation Thrombolysis In Myocardial Infarction (TIMI) grade 3 flow was established at the LAD. From the middle of the occlusion a sizeable D1 was revealed with a 99 % stenosis at its ostium and TIMI 1 flow (see Figure 2G). The D1 was wired with a Fielder FC wire and its ostium was dilated with an Invader 2.0x15 mm balloon. Following kissing balloon postdilatation (with an Invader NC 3.5x20 mm in the LAD and an Invader 2.0x15 mm in the D1) (see Figure 2H), an optimal angiographic result was obtained in both branches with TIMI 3 flow (see Figure 2I). For the LAD recanalisation, total procedural time was 46 minutes, contrast consumption was 75 cubic centimetres (cc) and radiation dose was 1.3 Gray (Gy).

Due to the fact that the LAD recanalisation was uncomplicated with low consumption of contrast media and low radiation exposure, the occlusion of the RCA was also addressed at the same session.

The intention was to perform a short and focused antegrade attempt for the RCA recanalisation and, in case of failure, to proceed with the retrograde techniques. However, while retrieving the Fielder FC wire from D1 we explored the accessibility of the collateral channels from the first septal branch. The Fielder FC wire without support of a microcatheter, using the septal surfing technique, easily crossed the CC2 septal collateral and was advanced to the distal RCA, reaching the distal cap of the occlusion (see Figure 3A). A Corsair microcatheter (Asahi Intecc, Aichi, Japan) was also advanced through the collateral channel to the distal cap (see Figure 3B).

Due to the proximal location of the occlusion, the RCA guiding catheter (GC) was stabilised at the ostium of the RCA using anchoring technique in a proximal conus branch with the inflation of an Invader 2.0x12 mm balloon (see Figure 3C).

Following that, an attempt to recanalise the RCA was done retrogradely with a Fielder FC wire. The wire was advanced in the subintimal space and failed to reach the proximal true lumen. The occlusion was then approached antegradely. A Pilot 150 wire was advanced in the occlusion but could not cross to the distal true lumen (see Figure 3D). Applying the principle of the reverse Controlled Antegrade Retrograde subintimal Tracking (CART) technique, we dilated the occlusion antegradely with an Invader 3.0x15 mm balloon. After antegrade dilatation and the creation of antegrade subintimal space, a Pilot 150 wire was easily advanced retrogradely to the antegrade GC (reverse CART technique) (see Figure 3E). The Corsair was also advanced to the antegrade GC through the occlusion (see Figure 3F) and a RG3 wire (Asahi Intecc, Aichi, Japan) was then externalised from the right femoral artery. Using this wire, the lesion was predilated consecutively with an Invader CTO 1.25x20 mm and an Invader 2.5x15 mm balloon (see Figure 3G). Following the predilatation, stent implantation was performed with a CORACTO 3.0x32 mm stent distally and a CORACTO 3.0x32 mm stent proximally. A third stent (CORACTO 2.75X17 mm) was necessary for the treatment of a dissection distal to the first stent (see Figure 3H/I). After postdilatation with an Invader NC 3.5x20 mm balloon (see Figure 3J) an optimal angiographic result was obtained (see Figure 3K). Total procedural time was 115 minutes, the contrast media used was 360 cc and the radiation dose reached 2.8 Gy.

Control angiographic follow-up at six months (see Figure 4) revealed an excellent angiographic result without signs of in-stent restenosis both in the LAD and the RCA coronary arteries, while the patient remained completely asymptomatic.

For years PCI remained the least favourable therapeutic option for coronary CTOs over optimal medical treatment and CABG, never exceeding 10 % and even decreasing in popularity over time.10 The reason was threefold: the low success rates of conventional antegrade techniques, unchanged over time, until recently, and averaging 70–80 %4 in experienced hands, the lack of prospective randomised trials demonstrating superiority of CTO PCI on hard clinical endpoints, and the suboptimal results of balloon angioplasty and stent performance in this hard anatomical setting.15

The CORACTO stent was developed in 2002 and it is a stainless steel stent with a strut thickness of 80 micrometres (μm) and a biodegradable polymer coating of 4 μm allowing controlled release of 1.7 μm/mm2 of Rapamycin. The coating is a poly(lactic-co-glycolic acid)-based copolymer, which is biocompatible and bioabsorbable, degrading into lactic acid and glycolic acid. After the degradation and complete drug release in 10–12 weeks there is a BMS remaining in the coronaries.

Technical and procedural success rates for CTO PCI have steadily risen over the last five years, as a result of increased operator experience, the development of novel CTO dedicated wires and microcatheters, the refinement of antegrade techniques, and the introduction of the retrograde approach.21 Success rates with modern antegrade techniques are currently in the range of 80 %. Retrograde techniques in expert hands added another 15 % of procedural success in CTO PCI, alongside shifting the field from lesion-related to collateral circulation-related predictive factors of failure, such as visible collateral connections, <90 degree collateral body tortuosity, and <90 degree angle between the distal collateral anastomosis with the CTO vessel.12,13

In the initial stages of their development, the retrograde techniques were mainly used as a second-line therapy after failure of the antegrade approach in repeat procedures. Current evidence suggests that they should be reserved for second attempts after antegrade failure, or as strategies of choice by experienced operators in very complex CTOs, where the expected antegrade success rate is <50 %.13

Recent trends in practice support the implementation of the retrograde approach during the same procedure, but after a short (approximately 15 minutes of radiation time and 50–75 ml of contrast media), focused antegrade failure.13 Moreover, the concept of CTO PCI as a unique entity with complementary antegrade and retrograde components has gradually matured over the years. At present, more experienced operators interchangeably employ both antegrade and retrograde techniques in a non-dogmatic manner, switching from one approach to another, always based on clinical and anatomical criteria, with great efficacy and safety.

CTO PCI is related to certain procedural and in-hospital complications, well described in literature,13,21 but traditionally is considered a low risk procedure. There are no randomised trials comparing CTO versus non-CTO PCI, but indirect comparisons demonstrate a comparable low incidence of procedural events with MACE rates not exceeding 4–5 %.4 Retrograde techniques, due to their inherent complexity, are associated with certain complications not observed during antegrade CTO recanalisation, that tend to be minor and easily treatable in the majority of the cases. These complications may involve the occluded artery (retrograde perforation/dissection), the collaterals (rupture/haematoma of the septal or epicardial collaterals, perforation to the right ventricle [RV]/left ventricle [LV], septal wire trapping, epicardial flow disruption with ischaemia) and the donor artery (dissection/thrombosis potentially life-threatening, spasm leading to ischaemia).12,13

In this report we describe a case of double CTO percutaneous recanalisation in a symptomatic young patient. Both antegrade and retrograde techniques were interchangeably employed, without prejudice or strict predetermined order, to facilitate successful CTO recanalisation. Thanks to increasing operator experience and development of more sophisticated techniques, CTO PCI is currently achieving high procedural success rates and serves as an alternative and efficient approach for complex CTO treatment. For safety and efficacy reasons, experience in the field of CTO PCI (>300 CTOs and >50 retrograde procedures per year) should be considered a prerequisite for such recanalisation attempts. In case safety criteria for CTO PCI cannot be met, optimal medical treatment or CABG should be preferred. 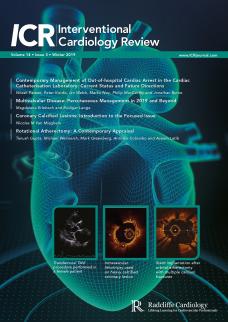