Transcatheter aortic valve implantation (TAVI) has been in use for 16 years. As there has been a rapid expansion in its use, there is a need to optimise TAVI programmes to ensure efficiency. In this article, the authors discuss the reasons why clinicians need to make the TAVI pathway more efficient and describe the most important steps to take from screening to early discharge, including procedural optimisation.

Sixteen years have elapsed since the first transcatheter aortic valve implantation (TAVI) and the procedure has now been widely adopted. The first time the procedure was performed, the patient was under conscious sedation with local anaesthesia for an antegrade-transseptal procedure.1 The pioneering team in Rouen published a series of case reports for patients treated via a transfemoral route using a conscious sedation/local anaesthesia policy. The outcome in this cohort was excellent, with a low 30-day mortality and conversion to general anaesthesia required in only 3.3% of the cases and low 30-day mortality.2

However, in the vast majority of the early cases, general anaesthesia and transoesophageal guidance were used as routine. The main reasons for this were the need for surgical cutdown, because of the large bore sheaths that were used at the time; the need for a thorough assessment of residual aortic regurgitation post-TAVI; and the need for early identification of complications.

When the procedure was first in use, we had to deal with multiple potential complications including vascular injuries, aortic annulus rupture, moderate-to-severe perivalvular regurgitation, the need for a permanent pacemaker and stroke.3 Using a general anaesthetic was a safe way to quickly identify life-threatening complications and bail out of the procedure.

Where are we in 2019? More than 300,000 TAVIs have been performed worldwide in more than 70 countries across the globe.4 We are no longer using 20–24 Fr introducer sheaths, but devices that are 14–16 Fr compatible, reducing rates of vascular complications.5 Transcatheter heart valves (THV) have improved, allowing more predictable deployment and preventing paravalvular regurgitation. Transfemoral access is used in more than 90% of cases in centres where the procedure is carried out regularly.

The large and rapid expansion of TAVI has led to constant improvement in techniques and clinical outcomes for patients, but has also presented a new problem: we must treat more patients in a more efficient way with shorter procedures and shorter hospital stays, while maintaining excellent outcomes. The cost-effectiveness of TAVI has been demonstrated in several studies with various types of THV, at least for transfemoral access, even if significant variations in cost can be identified in different countries’ healthcare systems. Even when treating inoperable, high and intermediate-risk patients, the procedure could be more cost-effective by reducing the use of human resources and enabling shorter hospital stays.6 Efficient TAVI has become a contemporary challenge.

How do we Achieve Greater Efficiency for TAVI?

The core idea behind an efficient TAVI programme is to be able to treat all patients who need the procedure. It embodies several aspects: optimisation of the screening phase (Table 1), a minimalist approach during the procedure and early discharge without compromising clinical outcomes (as efficient TAVI should aim to eliminate complications).

Optimising the screening phase is potentially the most important part of an efficient TAVI programme. It should quickly provide the heart team with all the necessary elements for a multidisciplinary discussion: transthoracic echocardiography, multidetector CT of the aortic root and peripheral vasculature, coronary angiogram (according to local practice) and blood tests. In many institutions, a dedicated TAVI coordinator is in charge of scheduling the screening tests during a 2–3-day hospitalisation, gathering all the results for the heart team, scheduling the TAVI procedures and preparing the mode of discharge of the patients after the procedure. This enables the team to screen all eligible patients. This is just one example of how a simple change has led to a more fluid TAVI pathway. 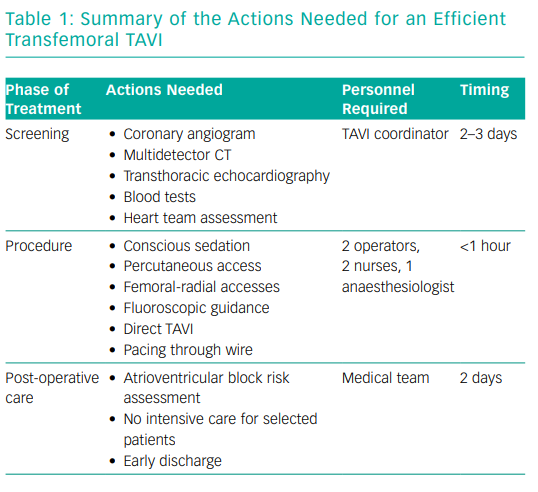 Improving the Efficiency of the Procedure

Making the procedure more efficient means avoiding steps that are inessential. It starts by identifying the indispensable human resources for a single procedure. The contemporary trend for transfemoral TAVI is to reduce the team to two main operators, an anaesthesiologist, a perioperative nurse to prepare the THV and a circulating nurse to cover logistics in the operating room (Figure 1).

A single nurse can prepare any THV while this optimised team can handle the most frequent or life-threatening complications, such as vascular injury or cardiac tamponade. Optimising human resources is a challenge for most hospitals. Apart from saving costs, people can be freed up to do other tasks and the money saved could be invested in a dedicated TAVI coordinator. The procedure involves local anaesthesia and conscious sedation, fully percutaneous femoral access and fluoroscopic guidance.

Let us analyse these elements separately. Conscious sedation is the gold standard for transfemoral TAVI because general anaesthesia can be harmful, particularly in older people who can be at increased risk of post-operative delirium and subsequent mortality.7 Foley urinary catheters, jugular lines or radial access to monitor arterial pressure, are generally avoided. For femoral access, the most popular closure devices are Prostar and ProGlide, which are similar and carry low rates of major vascular complications.8 However, new closure devices are being introduced that may simplify and further secure femoral closure for early ambulation.

Many teams are moving to the use of a single femoral access and a radial access as the secondary arterial access to reduce the rate of vascular complications. Given the accuracy of positioning of current THV and their efficiency in mitigating paravalvular regurgitation, the use of transoesophageal echocardiography can be questioned.9 Fluoroscopic guidance has proven its feasibility since the early days in Rouen and it is becoming the rule in most institutions. Having said that, keeping in mind that we should not compromise patient safety, it is generally recommended to have a transthoracic echography machine in the operating room in order to quickly identify complications; at least to verify the absence of pericardial effusion after the THV has been deployed. 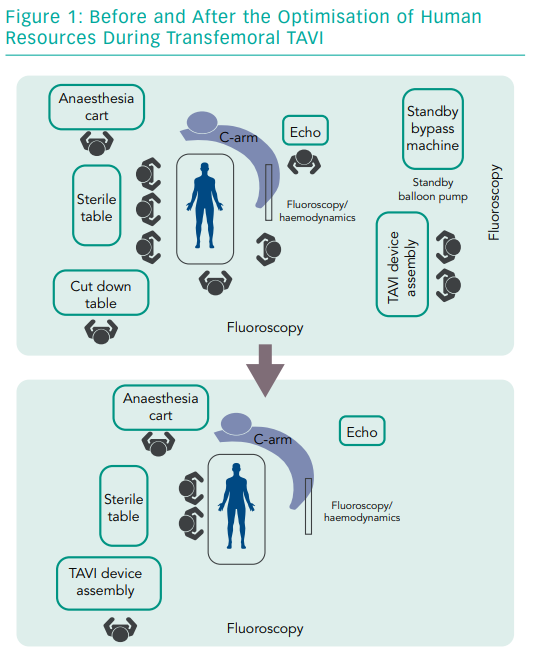 Other ways to simplify the procedure have also been introduced, including the avoidance of balloon valvuloplasty before THV (direct TAVI) and pacing through the left ventricular wire. Direct TAVI reduces the potential complications associated with valvuloplasty, such as conduction disturbances, annular rupture and stroke. The goal of pacing through the left ventricle wire is to prevent right ventricular perforation with pacing leads. Diluted contrast (two-thirds dye and one-third saline solution) is also proposed to reduce the risk of contrast-induced nephropathy. Activated clotting time (ACT)-guided procedures are common, aiming at an ACT close to 200–250 seconds to prevent bleeding. The systematic use of protamin post-procedure is debated.

The last aspect of an efficient TAVI programme is early ambulation and early discharge, usually within two days. This will ensure an adequate turnover of uncomplicated patients. Local rules have to be determined to make sure that every patient can be safely discharged, particularly without an increased risk of delayed atrioventricular block and with an adequate follow-up.

As an example, a patient without right bundle branch block at baseline, treated with a balloon-expandable THV without any procedural issue or conduction disturbance could, in theory, be discharged the next day. Other examples are valve-in-valve procedures, even if treated with a self-expandable platform, because the risk of AV block is minimal, as well as any patient with a previous pacemaker. These patients could also be candidates for TAVI without a subsequent stay in intensive care.

As a word of caution, it is important to identify appropriate candidates for a more efficient approach to this intervention. There are indications for a longer screening period, such as baseline renal impairment or geriatric assessment. There are also indications for general anaesthesia, such as a need for a ‘zero contrast’ procedure with transoesophageal echocardiography guidance. In some cases there will also be a need for a longer period of post-operative surveillance, such as high risk of AV block, depressed renal function, vascular complications or the need for blood transfusion.

Efficient TAVI relates to the ability to safely treat more patients in an optimised environment in a cost-effective way. Optimisation of human resources and simplification of the procedure are at the core of this strategy. Efficient TAVI has several advantages, including shorter procedures, better recovery, early discharge, lower hospital costs and an increased volume of TAVI procedures.