The endovascular treatment of infra-renal abdominal aortic aneurysm (AAA) has become an established treatment modality over the last 10 years. This technique is now arguably the first-line therapy for the majority of patients. Data to support this position can be derived regarding early mortality rates, cost-effectiveness and reduction of re-intervention rates. Endovascular repair of AAA requires further refinement with regard to enhancing long-term durability through the use of better intra-operative techniques and patient selection. Adoption of 3D computed tomography (CT) imaging and better methods of intra-operative quality control are essential to ensure continuing improvement of technical results. Future developments will see the adoption of endovascular repair for ruptured and supra-renal aneurysms.

Since its inception in the early 1990s, endovascular repair (EVR) of aneurysms has been subjected to analysis in several randomised controlled trials. Now it is a mainstay of treatment for abdominal aortic aneurysms (AAA). As the technique has moved from conception through competitive analysis and finally into mainstream practice, several issues have remained controversial. These will be addressed in this brief review.

Despite a wealth of comparative evidence,1,2 there is still fierce debate as to whether EVR should be positioned as the first-line therapy for AAA. This may be illustrated by the take-up rates for EVR across individual countries in Europe, with the percentage of patients treated by endovascular therapy ranging from the high teens to just under 50%. At present, approximately 70–80% of patients with an infra-renal AAA may be suitable for an EVR using morphological indications unrestricted by the device manufacturers’ indications for use. Without any doubt, those treating AAA should be able to assess patients for both open and endovascular therapies and offer both. It is the author’s belief, however, that there are now compelling data to suggest that most aneurysms should be considered for an endovascular first approach.

All of the randomised trials published to date have suggested that EVR offers an early mortality advantage of approximately 4% – an advantage that is maintained (for aneurysm-related mortality) in the mid-term.3 Similarly, robust administrative data sets from the US4 and the UK have demonstrated that EVR has a significantly lower overall mortality than open repair for elective aneurysm surgery in all age groups (1.2 versus 4.8%). The difference in mortality is particularly important in older patients (respective mortality in patients >85 years of age: 2.7 versus 11.2%). Perhaps as importantly, the percentage of patients over 80 years of age discharged home following EVR is 10% higher than those undergoing open repair (90 versus 80%, Holt and Thompson, unpublished data). These early mortality data are reflected in patient preference for operative technique. Winterborne et al.5 surveyed 100 patients with small aneurysms and reported that 84% of patients preferred endovascular over open repair. The most important factors defining this choice were post-operative mortality and morbidity.

The cost-effectiveness of EVR has recently been the subject of a Health Technology Appraisal by the National Institute for Health and Clinical Excellence (NICE) in the UK. In general terms, the likelihood of a technology being recommended for adoption is related to the incremental cost-effectiveness ratio (ICER). An ICER between £20,000 and £30,000 is often considered an appropriate threshold. Using estimates of cost differential, aneurysm-related mortality, all-cause mortality and late re-intervention rates, NICE suggested a possible ICER for EVR of £12,000. NICE recommended EVR as an appropriate treatment option for AAA and suggested that “the decisions on whether endovascular aneurysm repair is preferred over open surgical repair should be made jointly by the patient and their clinician after assessment of a number of factors, including: aneurysm size and morphology; patient age, life expectancy and fitness for open surgery; the short- and long-term benefits and risks of the procedures including aneurysm-related mortality and operative mortality.”

In deciding the type of repair offered to patients, most surgeons have balanced the early mortality advantage of the endovascular approach against the long-term durability issues that have affected EVR. In the early stages of the technique, the development of high-pressure endoleaks was common and re-intervention rates approached 10% per year. In recent years, however, meta-analytical data have suggested that both technical problems and re-intervention rates have become significantly less common.6 In a recent review of administrative data, Schermerhorn et al.4 demonstrated that major re-interventions were required in 1.6% of patients four years after EVR. It is important to consider that patients undergoing open repair also have re-intervention rates. In the same paper, it was revealed that patients four years after open repair had a 14.2% prevalence of laparotomy-related hospitalisation (compared with 8.1% in the EVR group). Contemporary data suggest that in many practices, endovascular aneurysm surgery may now be regarded as the first-line therapy for patients with infra-renal AAA. The early mortality advantage is significant in terms of early outcomes and patient preference, and the reported re-intervention rates are decreasing.

If endovascular surgery is to be widely adopted as the first-line therapy for aneurysms, it is essential that considerable efforts be made to increase long-term durability and reduce re-intervention rates in both the short and long term. This might include more stringent selection of patients, optimisation of intra-operative technique and rationalisation of follow up.

The key determinants of success during the initial EVR procedure are patient selection and graft sizing. It has proved difficult to identify groups of patients who fare better with endovascular than open repair using traditional scoring systems. Scoring systems that have been validated for open procedures typically incorporate physiological variables that may not be applicable to patients undergoing EVR.

In a retrospective analysis of contemporary data, Bohm et al.7 demonstrated that the area under the receiver operating characteristic (ROC) curve for predictions of mortality using the Glasgow aneurysm score, vascular-POSSUM, modified customised probability index (mCPI) and customised probability index (CPI) were 0.68, 0.66, 0.63 and 0.65, respectively. None of these scores would indicate a clinically useful scoring system that would be demonstrated by an area under the curve (AUC) in excess of 0.8. Preliminary data from an Australian database suggest that the addition of morphological data will be required to inform a pre-operative prediction model.8 Scoring systems to facilitate pre-operative selection are indeed essential to the future of this technology.

Historically, axial computed tomography (CT) scans and marker catheter angiography were used for graft planning. The advent of 3D CT scanning offers a significant opportunity to increase the accuracy of graft sizing. 3D CT allows data to be reformatted in planes perpendicular to the vessel and therefore allow more accurate estimation of vessel diameter and length (see Figure 1). In addition, 3D CT allows accurate pre-operative planning of tube angulation to minimise parallax error by using virtual angiography (see Figure 2). It might be argued that planning with 3D CT is now an essential prerequisite for surgeons wishing to perform EVR.

During graft implantation it is essential that the aorta be covered between the renal and iliac bifurcation. One potentially preventable cause of early morbidity and mortality is early re-intervention within 30 days of the primary procedure. Data from the DREAM study demonstrated an early vascular- or endograft-related complication rate of 16%. Similarly, the EVAR I trial demonstrated that one in 10 patients required early endovascular re-intervention for procedure-related complications. The risk of early re-intervention may be higher in patients with hostile aortic morphology. Type 1 endoleaks have been reported in up to 11% of procedures with unfavourable aneurysm morphology, primarily neck angulations (>60 degrees) and short neck length (<10mm).9

Since 2007, the Institute has utilised dynamic CT scanning to assess the technical adequacy of EVR at the termination of the procedure (see Figure 2). Dynanic CT uses rotational angiography to generate CT-like images that may be assessed on a workstation. Using this technology the re-intervention rate in the Institute has dropped to negligible levels, with a consequent positive impact on mortality.10,11 Clearly, units performing EVR need a robust programme of quality assurance including accurate assessment of technical adequacy.

Where Should Endocascular Repair Be Performed?

In most vascular surgical procedures there is a relationship between the volume of hospital procedures and subsequent outcome. This relationship is particularly well defined for open aneurysm procedures, where a historic case-load below 32 procedures per year is associated with relatively poor outcome.12,13 Some endovascular procedures appear to translate well to lower-volume centres and there is an argument that this may be the case for EVR. Analysis of Hospital Episode Data data for 2005–2007 revealed a distinct volume–outcome relationship for EVR, with a 77% reduction in mortality for every 100 EVRs performed (see Figure 3). These data suggest that EVR for AAA should be confined to centres able to generate a high volume of cases.

In the next few years EVR is likely to be expanded into alternative clinical scenarios, namely the treatment of ruptured aneurysms and aneurysms involving the visceral and renal vessels. Both of these scenarios offer considerable challenge.

Treatment of ruptured AAA with endovascular techniques is theoretically attractive, with the avoidance of laparotomy, reduction in aortic cross-clamping and obviation of the haemodynamic disturbance. In most case-series comparing open repair with EVR, there has been a trend towards a reduction in mortality using the endovascular route, although few series have reached statistical significance.14

There have been several prospective studies that have not demonstrated a difference in mortality between the two techniques, although both have been small.15 More significantly, registry and administrative data sets have shown a significant reduction in mortality when EVR is used in the ruptured situation. However, it must be remembered that these preliminary data compare open and endovascular techniques in a cohort of patients who are haemodynamically stable with aortic morphology suitable for EVR. What is far less certain is whether EVR has the ability to reduce mortality in the overall cohort of patients with ruptured AAA. Several key questions require attention:

To answer many of these questions several randomised trials are currently under way in the UK, The Netherlands and France. The design of the UK-based Immediate Management of the Patient with Rupture: Open versus Endovascular Repair (IMPROVE) trial is illustrated in Figure 4. The treatment of aneurysms involving the visceral and renal vessels has always been a difficult clinical challenge. Juxta-renal, supra-renal and thoracoabdominal aneurysms pose significant anatomical and physiological challenges for open surgical repair, with mortality rates significantly increased over those reported for infra-renal AAA. The excess mortality is multifactorial but is related to extensive dissection, thoracoabdominal access and the ischaemia–reperfusion injury caused by prolonged periods of visceral ischaemia. In recent years, fenestrated and branched endografts have been designed to allow the endovascular therapy of these lesions (see Figure 5). The endografts rely on in situ reconstruction of the endograft to maintain perfusion of the visceral and renal vessels. Early, although extremely limited, evidence suggests that the endovascular technique offers a significant improvement in mortality over conventional surgery16,17 and that this therapy will become the gold standard in a relatively short space of time.

The endovascular treatment of infra-renal AAA has become an established treatment modality over the last 10 years. The technique is now arguably the first-line therapy for the majority of patients. EVR of AAA requires further refinement with regard to enhancing long-term durability through the use of better intra-operative techniques and patient selection. 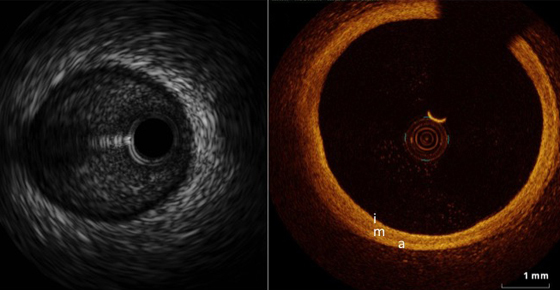 Choice of Intracoronary Imaging: When to Use Intravascular Ultrasound or Optical Coherence Tomography
Read Article 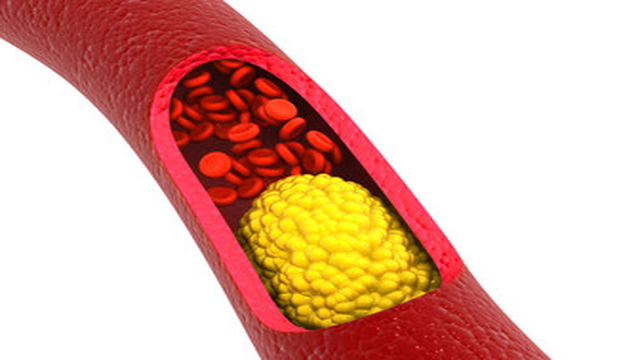