Randomised trials in the infra-renal abdominal aorta have demonstrated endovascular is better than open repair in preventing aneurysm-related death up to four years post-operatively. Patients with thoracic aneurysms potentially have even more to gain from the endovascular technique. Mortality rates from open thoracic aneurysm repair are three times higher than the infra-renal aorta. Furthermore, a 10% major morbidity rate means that many patients are simply too frail to withstand open surgery. In contrast, the latest reports from the large EURopean Cobalt Stent With Antiproliferative for Restenosis (EUROSTAR) trial and the United Kingdom Registry for Endovascular Treatment of Aneurysms (RETA) suggest the peri-operative mortality for elective repair of degenerative aneurysms is 5%.1 Patients requiring emergency procedures for acute symptomatic or ruptured aneurysms may benefit the most from endovascular repair. Outcome from open surgery is poor, whereas survival following endovascular repair appears somewhat better (17% peri-operative mortality).2 With such clear benefits randomised trials in the thoracic aorta are probably unnecessary.

The forces encountered in the thoracic aorta, particularly the arch are significantly higher than in the infra-renal abdominal aorta. This puts greater strain on endovascular devices. Stent-grafts incorporating longitudinal stiff wires and those comprising sub-standard nitinol stents have been found wanting. Stent fractures have resulted in design modification and, in some cases, devices have been withdrawn from the market.

In the infra-renal aorta, the net force on the stent-graft tends to act distally. Successful stent-grafts require proximal fixation to prevent distal migration. In the thoracic aorta the net forces on the stent-graft tend to produce proximal migration at the distal landing zone. Barbs orientated cranially on the distal component may prevent proximal migration. Distal migration is a less common phenomenon and the use of uncovered proximal stents with hooks and barbs is unnecessary and dangerous. Numerous centres have reported uncovered proximal stents eroding through the aortic arch.

Despite some early failures with first generation stent-grafts in the early to mid 1990s, currently available stent-grafts can be expected to achieve successful primary aneurysm exclusion in at least 90% of patients.

Spinal cord ischaemia following endovascular repair occurs in up to 5% of patients compared with 8-15% following open repair. The use of cerebro-spinal fluid (CSF) drainage has been shown to improve outcome in those patients who develop symptomatic ischaemia. The role of prophylactic CSF drainage remains controversial. Stent-grafting of the low thoracic/supracoeliac aorta, occlusion of the left subclavian artery, hypotension (ruptured aneurysm) and previous aortic (thoracic or infra-renal) surgery are most vulnerable to spinal cord ischaemia. In these high-risk patients prophylactic CSF drainage may be justified.

Stroke rates following endovascular repair should be less than 2%. They are invariably the result of emboli from the aortic arch. Thoracic stent-grafting should be performed on a systemically heparinised patient and with a minimum of guidewire manipulation in the arch.

Some questions remain about the long-term durability of thoracic stent-grafts. Long-term data is currently only available on stent-grafts that have been superceded by superior designs. However, most studies suggest the number of endoleaks and secondary interventions have been reduced to an acceptable level. During a mean follow-up of 14 months with the latest generation of stent-graft, Greenberg reported a secondary intervention rate of 15%.3 Reported endoleak rates vary. Lee reviewed 13 series and found the endoleak rate ranged from 0-30%.4

Differences in aneurysm morphology, type of stent-graft, operator experience and method and duration of follow-up are likely to account for the variation. Importantly, the majority of long-term problems including endoleak can now be managed by further endovascular intervention rather than resorting to open conversion.

Many of the complications arising in contemporary series of thoracic endografting comprise patients with proximal thoracic aneurysms (adjacent to the left subclavian artery/arch). Current stent-graft designs, which are stiff, make conformity to the tortuous aortic arch difficult. Young patients, where the aorta is narrow and the arch describes a tight arc, present a particular problem. Although some stent-graft designs possess great flexibility, none have flexibility in the most proximal portion. The consequence is that stent-grafts tend to protrude in to the aortic lumen like a chimney. Stent-grafts so orientated are destined to fail.

An alternative endovascular method for dealing with for proximal descending aneurysms is to push the stent-graft further around the arch which involves covering the left subclavian artery. This manoeuvre gains an extra 10mm or so (the distance from the left subclavian artery origin to the left common carotid artery) of proximal neck and helps to improve the conformity of the stent-graft around the distal aortic arch. Occlusion of the left subclavian artery can be performed with relative impunity. The presence of a left internal mammary coronary artery (LIMA) bypass graft, or a dominant left vertebral artery are contra-indications. Young patients may complain of claudication post-operatively.

Fenestrated and side-branch stent-graft technology has been used in patients with complex abdominal aortic aneurysm morphology to preserve side-branch patency. A small number of cases have been performed using the same technology in the arch. These techniques are in their infancy and are technically difficult propositions. Stent-grafts are not torqueable in the thoracic aorta due to the distances involved and the tortuosity of the intervening vessels. Further, the risks of cerebral embolisation from guidewire manipulation in the arch are significant.

Some authors have described an alternative, hybrid approach to repair aneurysms adjacent or proximal to the left subclavian artery. The procedures comprise one or more supra-aortic bypass grafts followed by endovascular exclusion of the aneurysm.

Overall, development of stent-grafts for repair of distal descending thoracic aneurysms may be viewed as a success story with encouraging peri-operative and mid-term results. Satisfactory endovascular solutions to arch and proximal thoracic aneurysms have so far remained elusive. Endovascular specialists need to work with industry to produce stent-grafts that conform to the curvature of the aortic arch and prevent the high number of graft related complications seen in that area. 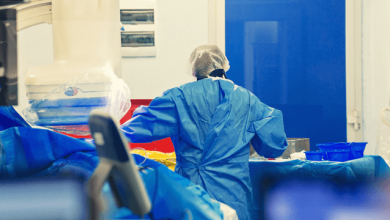