The Science Behind Acute Ventricular and Myocardial Unloading

Dr Burkhoff is an Associate Professor of Medicine at Columbia University, Division of Cardiology. He has authored more than 200 peer-reviewed publications. He is a world expert in pressure–volume relationships in the heart.

Dr Burkhoff began his presentation by outlining clinical goals in the setting of acute myocardial insult, including myocardial infarction, cardiogenic shock and chronic heart disease. These goals include myocardial salvage to minimise the amount of myocyte loss and to prevent, or at least limit, myocardial and ventricular remodelling with the aim of maintaining normal left ventricular (LV) size and function. Another important goal is to improve both short- and longterm survival: this is poor in patients presenting with cardiogenic shock in the first 30 days, and the risk of death persists over several years. The major physiological goals are to achieve a normal haemodynamic profile in terms of cardiac output, mean arterial pressure, central venous pressure and pulmonary capillary wedge pressure. However, these approaches do not specifically target myocardial injury in acute myocardial infarction (AMI). It is also important to reduce LV preload pressure to prevent acute stretch of the ventricular wall and subsequent remodelling, and to minimise myocardial oxygen consumption. Dr Burkhoff emphasised how myocardial oxygen consumption – the major contributors to which are heart rate, LV contractility and myocardial mechanical work (pressure–volume work) – may be influenced by cardiac unloading.

Relationship between oxygen consumption and PVA; b) Impact of heart rate 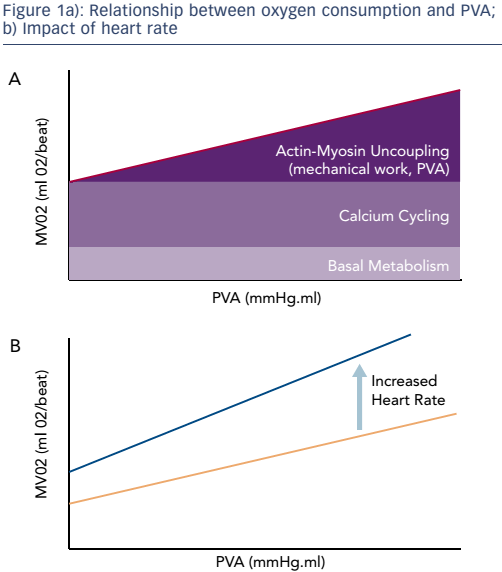 An important concept underlying the lack of success of pharmacological interventions such as inotropes in the treatment of AMI is that these approaches increase the power expenditure of the heart, thereby increasing the stress placed on the organ. This contrasts with what occurs in acute LV unloading. Acute cardiac unloading is defined as the reduction of total mechanical power expenditure (as opposed to work) of the ventricle, which correlates with reduction in myocardial oxygen consumption and the haemodynamic forces that lead to ventricular remodelling.

Effect of the Impella on LV loading and energetics 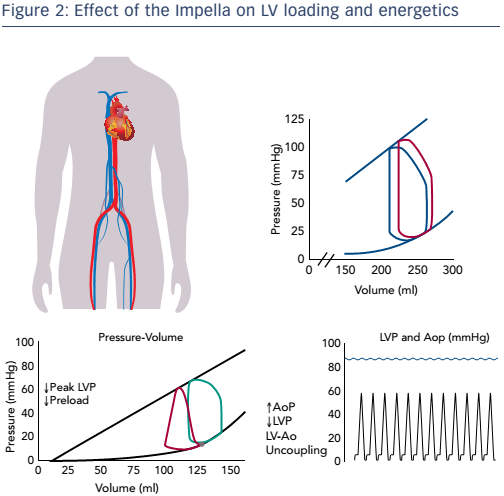 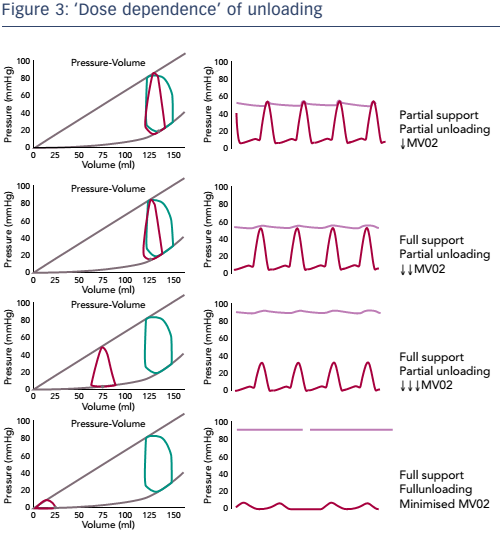 The physiological goals of myocardial unloading may be achieved by various means. These include pharmacological interactions involving ionotropic agents or vasopressors and the use of mechanical circulatory support (MCS) devices. The use of ionotropes increases heart rate, contractility and PVA, while the use of vasopressors increases total peripheral resistance. Since the resulting increase in heart rate has a detrimental effect on oxygen consumption, if cardiac recovery is a therapeutic goal the use of these agents should be minimised.

Dr Burkhoff next compared the available MCS devices, including the intra-aortic balloon pump, the shortcomings of which were discussed in Dr Braunwald’s presentation. Another device, the TandemHeart™ (CardiacAssist Inc), is a left ventricular assist device that pumps blood from the left atrium to the aorta. Implantation requires trans-septal puncture, which may be a challenging procedure in an acute setting. A third MCS, peripheral extracorporeal membrane oxygenation (ECMO), is an intervention that draws blood from the vena cava and pumps it into the descending aorta, but this increases the LV afterload. The Impella ventricular support device aspirates blood from the left ventricle into the aorta. Since these four devices take blood from different regions of the heart, they have different effects on LV energetics.3 Each device has a characteristic impact on the pressure–volume loop.

While the patient is on peripheral ECMO support, the left ventricle must eject blood through the aorta. The ventricular end diastolic pressure will therefore rise to accommodate the increase in arterial pressure resulting from ECMO support. This results in an increase in the preload on the ventricle, and as a consequence the PVA and oxygen consumption increase. This is energetically unfavourable to the heart. Furthermore, the increased diastolic ventricular pressures can actually promote detrimental myocardial remodelling.

The Impella device has the opposite effect on myocardial energetics. It functions by aspirating blood directly from the ventricle into the aorta. As a result, the pressure–volume loop shifts left towards a lower volume, end diastolic pressure is reduced and PVA decreases. Since the reduction in the PVA means a reduction in myocardium oxygen demand, this effect is favourable (see Figure 2). Also important is the concept of LV–aortic uncoupling. If sufficient unloading is provided, the maximum pressure generation of the ventricle is reduced. If this pressure falls below the mean arterial pressure, the aortic valve will not open and blood is no longer ejected from the ventricle, thereby minimising the mechanical work of the heart. In this way, LV–aortic pumping alone maintains sufficient cardiac output and aortic pressure is uncoupled from LV function. Thus, acute unloading can greatly decrease myocardial energy consumption and the haemodynamic forces that drive ventricular remodelling processes. This is contrary to pharmacological interventions such as inotropes, that increase myocardial energy consumption and exacerbate unfavourable haemodynamic forces. The use of the Impella can thus potentially replace inotropes and avoid these detrimental effects, all while achieving physiological goals.

Dr Burkhoff discussed the important concept of the dose dependence of unloading, i.e. the relationship between the degree of support and degree of unloading. It is important to distinguish between partial support/partial unloading and full support/full unloading, and to understand that unloading and support are not necessarily equivalent (see Figure 3). Partial support and partial unloading occurs when the heart continues to provide some of the cardiac output while the device provides the rest. In this scenario, the aortic valve still opens and closes and the heart ejects blood. In full support/ partial unloading the entire cardiac output is provided by the MCS. In this scenario, the entire cardiac output is provided by the device, the heart is not ejecting blood and the aortic pressure is uncoupled from ventricular function. Oxygen consumption is reduced. During full support/partial unloading, however, the volume unloading of the ventricle is not maximised. Maximum reduction in ventricular volume and oxygen consumption is achieved during full support/ full unloading. In this scenario, mechanical support is increased such that the ventricular preload (volume) is minimised. This shifts the pressure–volume relationship further leftward, minimising the PVA.