A 40-year-old man presented to ED with sudden onset dyspnoea and severe chest pain radiating to his back. He also reported a year-long history of intermittent haemoptysis. On presentation, the patient’s observations were stable. The patient was born and raised in Tibet and reported having previously been treated for confirmed tuberculosis.

On CTA, the patient was found to have a large saccular aneurysm measuring 5.0 × 5.0 × 5.0 cm, arising from a focal location of the proximal descending thoracic aorta distal to the origin of the left subclavian artery with evidence of contained rupture. The mass was found to be causing significant external compression of the left main bronchus leading to significant effacement of the left main primary bronchi leading to extensive collapse in both left upper and lower lobes and overall reduction in volume of the left hemithorax.

An open repair was done to exclude the thoracic aneurysm and to also relieve compression from the bronchus. The saccular aneurysm was opened, an old clot was evacuated and the area dissected to its neck at the inferior arch. Nil communication with the bronchus was evident. The remaining aorta appeared relatively normal. The edges of the aneurysm neck were fashioned towards healthy aorta and the resulting defect closed, primarily with a single layer of bilaterally buttressed. Left lung recruitment achieved eventual satisfactory re-expansion. 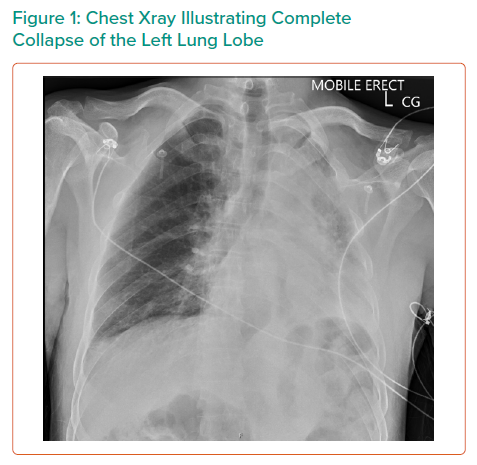 A repeat CTA illustrated good flow through the thoracic aneurysm, re expansion of the left lung, and decompression of the left main bronchus. Histopathology of washing and fine needle aspirates were all negative for tuberculosis and bacteria.