Although different drug-eluting balloons appear similar in the underlying concept, the technical differences are important. This article takes a closer look at the coating technique and applications of the different products in the market and why different techniques have been used. The main points covered are loading dose, excipient used and homogenous or partial drug coverage of the balloon used.

Disclosure: All the authors are involved in the research of drug-eluting balloons for Aachen Resonance GmbH.

Support: The publication of this article was funded by Aachen Resonance GmbH.

More drug-eluting balloons are entering the market. However, it is difficult for the user to understand the differences between these devices. This article aims to increase understanding of these devices, from the point of view of the manufacturer and for benefit of the user.

The differences of the balloon coating can be found:

Although different models of drug-eluting balloons are commonly perceived as similar – as no differences can be observed directly after usage – the opposite is in fact true.

The loading dose has a direct impact on the possible overall toxicity as well as the local toxicity of the device in general. The local toxicity of 100μmol/l tissue volume is a value that should be kept in mind and not transgressed for several hours or longer, as otherwise, the cells are killed and this can result in the possibility of an aneurysm, as has already been observed in the early drug-eluting stents.1,2 Also, the total dose is very important as around 80% of the drug will not reach the lesion but will be washed off into the blood circulation.3 It may be true that for small coronary balloons, these values of paclitaxel are only minimal compared to the dosage used during chemotherapy. However, if we think of long balloons in peripheral areas, which can have a length up to 20cm with a diameter of 6mm and a total drug amount of 11.3mg, a chemotherapeutical local drug level can be achieved.

The excipient is a crucial part of a drug-eluting balloon, as it may have a direct effect on the drug uptake. The rationale behind a higher drug uptake lies in the effect of the excipient. Some excipients enhance the solubility of the hydrophobic paclitaxel due to their bivalent hydrophobic/hydrophilic nature.

Another benefit of excipients may be the smooth dispersion of the drug in the excipient matrix increasing the uptake, like urea in In.Pact (see Figure 1). Other products do not use any excipient. Elutax (see Figure 2) for example, is exhibiting a porous paclitaxel texture with a large specific surface for better drug uptake (see Table 1).

The different excipients could also have an impact on the toxicity of the device, although the total applicable dose depends on the paclitaxel dose that has been applied onto the balloon. Nevertheless, another point of interest concerns the excipient itself. The known excipients used until now are Iopramid, urea, shellac and butyryl-trihexyl citrate (BTHC).

Urea is a natural substance that is presumably harmless as it is found as a natural compound in the blood flow. In contrast, Iopramid is not natural. However, while performing the angiography, Iopramid may be injected in a much higher concentration. Therefore, a real concern can be excluded. Shellac is an excipient used for encapsulating medicine for oral use.4 It has never been used as an injection, intravenously or intra-arterially before. Compared to Iopramid or urea, the uncertainty regarding a safe application is much higher.

The situation where BTHC is considered may be of even greater concern. Here, a plasticiser is used to increase the drug uptake. The BTHC may be used in plastic blood carriers for rendering the plastic smooth, but its use in the body for increasing the uptake of the drug seems questionable, especially as the substance is listed as a toxic substance by the European Commission5 and the local concentration of this excipient in the vessel tissue is much higher than the allowed pharmacological level after the administration of a blood transfusion. However, the major concern that arises is when the producer does not declare the substance at all and leaves the physician and the patient in complete incertitude and insecurity. The possible side effects may only be guessed and have never been investigated.

How the Balloon is Coated

In general, the balloons are all coated in a similar way. The balloon must be moistened with a paclitaxel solution. The containing solvent (usually alcohol) vaporises and the drug or drug excipient mixture dries on the surface. This coating principal applies to more or less all balloons like the SeQuent Please (see Figure 3) or In.Pact.

However, due to the fragile nature of most mixtures of drug excipient composition the drug is commonly dried onto the surface. The mechanical binding between drug and balloon surface is often inadequate. It has been observed that it is favourable to coat these balloons in a folded state to reach a sufficient drug amount. In this way, a drug loss due to a subsequent folding procedure is avoided. The uneven coating and the insufficient adherence of a significant drug portion can be seen in the following pictures of In.Pact, SeQuent Please and PanteraLux (see Figures 1, 3 and 4).

It is remarkable that the drug is captured mostly at the edges of the balloon folds and at the outer parts of the folded balloon. Inside the folds there is no coating. This becomes evident during the inflation of the balloon coated in this manner. The drug cracks away and the blank, non-coated parts are visible.

In comparison, there are balloons which are coated while the balloon is inflated. For example, the special drug coating process of Elutax enables a coating procedure while the balloon is inflated and the sufficient drug adherence in the dry state allows for a subsequent folding without significant drug loss. The uneven coating techniques of other balloons have a further disadvantage; because the vessel wall is exposed to different levels of paclitaxel, the paclitaxel deposition dose is very high in the vessel areas, where the balloon is coated and very low in the vessel areas in contact with the blank (uncoated) balloon. In an uneven plaque – the most common aspect in the daily medical world – the device may become inefficient.

To be informed as user of the type of coating, therefore, is crucial to understand the device. 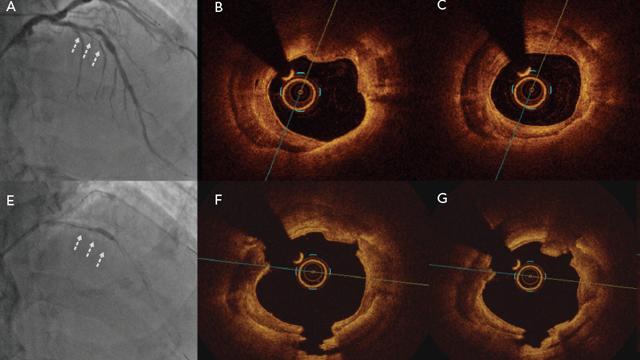