Careful and stepwise evaluation of the fractional flow reserve (FFR) index has been performed over the years, culminating in the landmark Fractional Flow Reserve Versus Angiography for Multivessel Evaluation (FAME) and Fractional Flow Reserve-Guided Percutaneous Coronary Intervention Plus Optimal Medical Treatment Versus Optimal Medical Treatment Alone in Patients with Stable Coronary Artery Disease (FAME II) trials. Findings from these studies demonstrated unequivocally the overall inadequacy of angiography versus FFR to correctly assess stenosis severity. Thus, proof of concept and clinical applicability was established beyond debate and will be discussed here.

Disclosure:The authors have no disclosures to make that are relevant to the present article.

The presence as well as the extent of myocardial ischaemia are key to determining cardiovascular outcome,1–3 thus its identification is important. An endeavour to improve diagnostic accuracy in deciding which angiographic lesions are haemodynamically significant led to the development of the concept of fractional flow reserve (FFR). Based on pressure-flow analysis of a stenosis during maximum flow, the FFR indicates the impact of a coronary stenosis on the maximum inducible coronary flow and whether it would be susceptible to induce ischaemia during stress. In a landmark report, Pijls and co-workers validated the FFR index in a group of patients with single moderate coronary artery stenosis using three different non-invasive stress tests (exercise test, thallium scan and stress echocardiogram).4 Based on the findings of this study, the authors proposed a cut-off FFR value of 0.75 as a threshold for discrimination between ischaemia-inducible and ischaemia-noninducible lesions (see for example Figure 1).

In the DEFER (Deferral versus Performance of Percutaneous Transluminal Coronary Angioplasty in Patients Without Documented Ischaemia) trial, the predictive value of this novel invasive index was tested for the first time in patients.5 The DEFER study was designed to investigate the safety and outcomes of deferring stenting in angiographic (FFR >0.75) stenoses. A total of 325 patients who were referred for percutaneous coronary intervention (PCI) due to an angiographic significant stenosis of >50 % were randomised to either the PCI group or PCI-deferral group. PCI was performed regardless of the FFR value in the PCI group. In the PCI-deferral group, PCI was undertaken only when the FFR was ≤0.75, and was deferred when the FFR was >0.75. At 12 months, event-free survival rates were similar in the deferral and PCI groups (89 % versus 83 %, respectively; P=0.27). The results of this study indicate that a large number of patients referred for PCI on the basis of a coronary stenosis without objective proof of ischaemia had nonsignificant lesions as indicated by the FFR value. Stenting these patients did not reduce the rates of adverse cardiac events neither did it result in an improved functional class.5 Following on from the DEFER trial, the Fractional Flow Reserve Versus Angiography for Multivessel Evaluation (FAME)6 and Fractional Flow Reserve-Guided Percutaneous Coronary Intervention Plus Optimal Medical Treatment Versus Optimal Medical Treatment Alone in Patients with Stable Coronary Artery Disease (FAME II)7 trials were designed to evaluate the superiority of FFR-guided revascularisation approaches compared with current medical practices in patients with stable coronary artery disease.

In this review we analyse why and to what extent the results of the FAME trials should influence our current decision-making process in the catheterisation laboratory.

At 1 year follow-up, the primary endpoint (a composite of death, MI and repeat revascularisation) was significantly reduced in the FFRguided group compared with the angiographic-guided group (13.2 % versus 18.3 %; P=0.02). Regarding the secondary endpoints, while the reduction of all-cause mortality rates (1.8 % versus 3.0 %; P=0.19), and reduction in MI rates (5.7 % versus 8.7 %; P=0.07) were not significant, the reduction in the rates of the combined endpoints-a non prespecified secondary endpoint- (7.3 % versus 11.1 %; P=0.04) was statistically significant. Collateral benefit of the FFR strategy was a decrease in the number of stents, a decrease in the amount of contrast and radiation time, resulting in a decrease in procedurerelated costs. In addition, the functional status of the patients was similar between groups, if not improved in the FFR group.6

These results were maintained up to 2 years after the index procedure.8 Subsequently, from 2 to 5 years, the risks for both groups developed similarly.9 Thus the FAME trial demonstrated, for the first time, the longterm safety and superiority of an FFR-guided approach, supporting the claim that functional rather than anatomical revascularisation should become the standard of care in this group of patients. 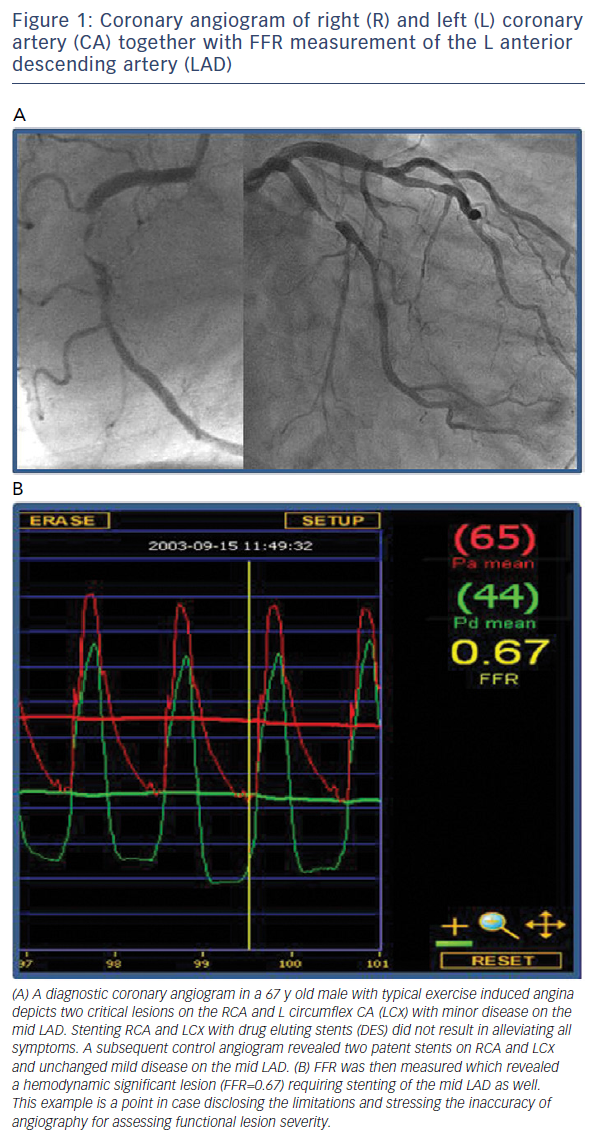 The FAME II trial was designed to clarify whether PCI of only haemodynamic significant stenoses (i.e. lesions with FFR ≤0.80) combined with optimal medical therapy would be superior to optimal medical therapy alone as a first approach in patients with stable symptoms.7 Interestingly, recruitment in this trial was halted prematurely at the recommendation of the Data and Safety Monitoring Board after enrolment of 1220 patients due to observation of a highly significant difference in the incidence rates of the primary endpoint (cumulative incidence of death, MI or urgent revascularisation) between the PCI group and the medical-therapy group. The primary endpoint event rate at 1 year showed superiority of stenting with drug-eluting stents (DES) combined with optimal medical therapy over optimal medical therapy alone (4.3 % versus 12.7 %; P<0.001), with a significant decrease in the incidence of urgent revascularisation (1.6 % versus 11.1 %; P<0.001). However, the rate of death or MI did not differ between strategies.7 The premature stopping of recruitment may have influenced these latter data. The overall conclusion was that lesions with a positive FFR of ≤0.80 need to be revascularised upfront rather than started on optimal medical therapy.

As in the FAME trial, in the FAMOUS-NSTEMI trial, two decision strategies were compared here, in patients with non ST-elevation acute coronary syndromes referred for urgent invasive management either within 72 hours of the acute ischaemic event or with recurrent ischaemia within 5 days after the index ischaemic event.10 Patients were randomised after the initial treatment decision based solely on angiography was made. FFR measurements were performed in all patients but only disclosed in the FFR-guided group. The results showed that when FFR data were disclosed the initial treatment option was changed in 21.6 % of patients thereby reducing the revascularisation rate. Overall, health outcome and quality of life in both randomised groups were similar despite the finding that in the FFR-guided group the rate of procedure-related MI was lower, but the rate of spontaneous major adverse cardiac events was higher during the 12-month follow-up period.10 These observations will need to be confirmed but appear to support the results from the FAME trials, stressing the point that treatment of ischaemia-inducible lesions should be an important aim in this population of patients.

As mentioned earlier, the seminal FFR validation study demonstrated in patients with a discrete coronary stenosis an FFR threshold value of 0.75, below which ischaemia was inducible as demonstrated in at least one of three different non-invasive stress tests.4 The authors reported a sensitivity of FFR to detect reversible ischaemia of 88 %, with a specificity of 100 %. Although this may appear to be a robust figure, it is not infallible. There are important reasons for the predictive value being <100 %.

The investigators of the FAME trial therefore decided that altering the FFR cut- off value towards 0.80 would eliminate the uncertainty of some stenosis with an FFR between 0.75 and 0.80. Accordingly, all the clinical trials and large registries demonstrating clinical benefit of FFRguided revascularisation over angiographic-guided strategies have been based on the cut-off value of 0.80. In a recent survey, 16 % of lesions interrogated with FFR were considered to fall in the grey zone based on their FFR value.20 Altering the FFR cut-off value towards 0.80 would increase its sensitivity, but at the cost of its specificity. By adhering strictly to the cut-off value of 0.75, a small number of patients might be denied the benefit of stenting. Were all lesions between 0.75 and with 0.80 to be stented, a larger number of patients would be denied the benefit of deferring stenting, with some, albeit small risk of procedural complications, restenosis, stent thrombosis or late-stent thrombosis.

The overwhelmingly convincing data from the FAME and the FAMOUSNSTEMI trials should not be ignored. The uniqueness of the FFR index as a marker of ischaemia-prone lesions in patients with coronary artery disease is well known.

However, despite the widely publicised results from the FAME trials, the extensive workshops on use and interpretation of FFR and the recommendation for FFR use as a diagnostic tool according to current guidelines,21 the actual rate of FFR use in clinical practice remains disappointingly low (<7 % in the United States).22 Several reasons for this low-level FFR use have been cited; however, cost and reimbursement issues are likely the most valid limitations that discourage people from routine FFR use. Such hindrance of a more liberal use of the pressure wires during diagnostic coronary angiography may be resolved in the future with the further development of non-invasive methods that allow FFR calculations derived from coronary computed tomographic angiography23,24 or from 3D quantitative coronary angiography.25

Whether a cut-off value of 0.75 or 0.80 is used, there will be some risk of false-negative results. Where FFR values fall within the grey zone, treatment decisions should not be made based on a single index, but after having considered all of the clinical information available as well as the objective quantitative data, including risk assessment and patient preferences.

The FAME trials have lifted the last road blocks towards the general acceptance by the cardiology community of this novel paradigm in which the diagnostic focus of coronary lesions is shifted from anatomical characteristics to a functional impact on myocardial perfusion. This unique vision on how to evaluate severity and prognosis of coronary lesions should force us to rethink our current algorithm for the treatment of patients with chest pain where FFR measurements may supplant non-invasive stress tests, which are only being performed in <50 % of patients prior to elective PCI.26 However, it will take some time to alter the current course of patient care.