Concomitant aortic stenosis (AS) and left ventricular outflow tract (LVOT) obstruction are increasingly encountered in clinical practice given the ageing population. The haemodynamic interplay between these two diseases can be challenging to diagnose, discern and treat.

Investigating these patients may require invasive haemodynamic assessment to determine not only the contribution of each to the totality of the obstructive physiology, but also their effect on one another. Nonetheless, identifying obstructive lesions in series may still be difficult, like interpreting fractional flow reserve in serial coronary stenoses.1 LVOT obstruction can be masked because of the increased afterload in severe AS, while severe LVOT obstruction can decrease stroke volume leading to a low-gradient, low-flow AS. The most definitive process is assessment of the residual gradient after treatment of the most obstructive lesion as determined by pullback.

An 82-year-old man with a history of hypertension and AS was referred to our structural heart clinic for evaluation of transcatheter aortic valve replacement. He had New York Heart Association class III heart failure symptoms and was feeling lightheaded. His cardiac examination was notable for a laterally displaced apical impulse and a harsh 3/6 late-peaking systolic murmur with no significant change apparent when standing or during the Valsalva manoeuvre.

Repeat TTE performed at our institution revealed hypertrophy of the basal septum associated with SAM and flow acceleration at the LVOT (Supplementary Video 1). Pulsed-wave Doppler at the level of LVOT revealed a late-peaking, dagger-shaped spectral envelope with aliasing consistent with LVOT obstruction (Figure 1). The peak instantaneous gradient (PG) was 56 mmHg at rest (Figure 2). The aortic valve was calcified with reduced excursion. A baseline heart rate of 50–55 BPM and concomitant aortic stenosis limited additional medical therapy options. Given the patient’s advanced age and comorbidities, the multidisciplinary decision was made to carry out detailed haemodynamic assessment of LVOT obstruction and aortic stenosis with possible alcohol septal ablation (ASA).

Baseline simultaneous ascending aortic (AAo) and left ventricular (LV) pressure tracings were obtained using a pigtail catheter and an end-hole multipurpose (MP) catheter, respectively. AAo pressure tracing exhibited the spike-and-dome pattern after premature ventricular contraction (PVC) – associated with dynamic LVOT obstruction – with a combined LVOT/AS peak-to-peak (PP) gradient of 75 mmHg at rest. AAo pulse pressure decreased after PVC provocation (the Brockenbrough–Braunwald–Morrow sign), with an increase in the combined gradient to 140 mmHg. The MP catheter was carefully withdrawn to below the aortic valve to isolate the gradient across the valve, and simultaneous pressures were re-obtained. The AAo-subaortic PP gradient measured 24 mmHg at rest, with no significant change after PVC (Figures 3 and 4).

Given the findings of severe dynamic LVOT obstruction in the absence of significant mitral valve regurgitation, ASA was then pursued. The most basal septal perforator, a branch of the ramus intermedius artery, was selected as the initial target. ASA was performed in the usual fashion (Supplementary Video 2).2 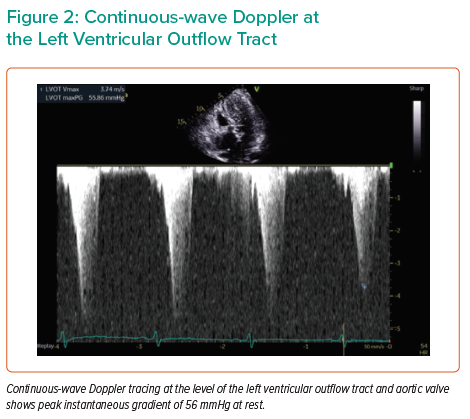 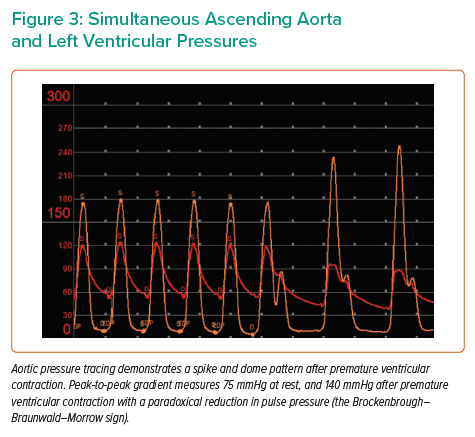 Repeat invasive AAo/LV pressure tracings were obtained. AAo pressure tracing now exhibited a delayed upstroke pattern at rest and after PVC – consistent with aortic stenosis – and a reduced resting combined LVOT/AS PP gradient of 30 mmHg (Figure 5). The AAo pulse-pressure remained unchanged after PVC provocation with a mild increase in PP gradient to 50 mmHg, consistent with the fixed stenosis of AS.

Immediately after ASA, LVOT PG measured 9 mmHg by Doppler. The patient remained haemodynamically stable with close monitoring in the intensive care unit for 48 hours. No conduction abnormalities were noted on telemetry.

He was discharged home and, 6 weeks after the procedure, LVOT PG measured 9 mmHg by Doppler. Aortic valve MG measured 27 mmHg and AVA 1.2 cm2 by the continuity equation. Given the complete resolution of his symptoms, watchful waiting was opted for his AS.

Serial lesions, such as those found in hypertrophic obstructive cardiomyopathy (HOCM) and AS, negate modelling assumptions made with the modified Bernoulli equation on echocardiography, because the proximal stenosis results in a significant velocity approaching the distal stenosis. Viscosity and friction may also be more relevant with tandem lesions, which the modified Bernoulli equation does not account for.3

Careful interdisciplinary pre-procedural planning with multi-modality imaging is essential before concomitant structural diseases are assessed. Although cardiac MDCT can be used to assess the LVOT diameter and the morphological manifestation of SAM, it provides less information about haemodynamics and tissue characterisation than cardiac MRI.4 Therefore, invasive haemodynamic measurements are essential.

Patients with AS demonstrate a parvus et tardus tracing – reduced in amplitude and delayed – because of the restrictive opening of the valve and the resulting fixed obstruction. LVOT obstruction, on the other hand, is dynamic, occurring in late systole with aortic pressure rising rapidly at the time of aortic valve opening, thus creating a spike-and-dome pattern. Typically, after a PVC, there is a compensatory pause that causes an increase in the diastolic filling time and subsequently expands the diastolic volume. Following the Frank-Starling mechanisms, the stroke volume increases with end-diastolic volume expansion, resulting in more cardiac muscle stretch and myocardial contractility, causing a rise in the arterial pulse pressure.5 The Brockenbrough–Braunwald–Morrow phenomenon occurs with LVOT obstruction as a paradoxical decline in arterial pulse pressure after a PVC. However, with both disease processes coexisting, the decline in pulse pressure may be blunted.6

In the presented case, the overall haemodynamic findings were consistent with a large contribution from the LVOT to the overall obstruction: a spike-and-dome pattern; a post-PVC drop in aortic pulse pressure; and a higher trans-LVOT gradient relative to trans-AS gradient. Alternatively, pharmacological agents, such as phenylephrine, can be used to induce afterload augmentation, reducing outflow obstruction.7

ASA emerged in the mid-1990s and has since developed as a safe alternative to surgical myectomy for treating elderly patients with significant comorbidities and a favourable coronary anatomy whose symptoms are refractory to optimal medical therapy.8

Left anterior descending artery dissection, coronary artery spasm, anterior wall infarction and cardiac perforation are possible complications (2%), while atrioventricular block is the most common.9,10 ASA may cause a transient or permanent disruption of the conduction system: first-degree atrioventricular block can develop in 53% of patients, right bundle branch block in 46% and complete heart block requiring permanent pacemaker implantation in 10.5%.11,12

A slower rate of alcohol injection has been correlated with a lower incidence of complete heart block.12 Additionally, the overall incidence of complications has been correlated with decreasing alcohol dose (from a mean of 2.9 ml to 0.8 ml).13 There is also the potential for an arrhythmogenic scar to develop but this has not been demonstrated to have a deleterious impact on long-term survival.14 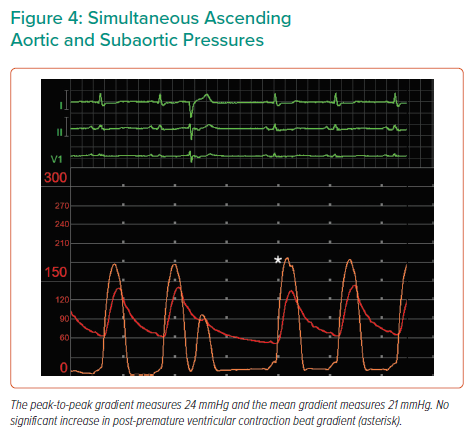 After the procedure, most of the acute reduction in gradient likely represents stunning and is pathophysiologically different from the more delayed phenomenon, which is a result of scarring and thinning of the basal septum. The immediate diminution in the outflow gradient may be followed by a recurrence of the gradient 1–3 days after ASA. Therefore, it is recommended to repeat TTE with assessments of LVOT and AS gradients 1–2 months later, at which time decision for AS treatment can be made.15

The presented case illustrates the complex haemodynamic interplay between LVOT obstruction and concomitant AS and disentangling these lesions by meticulous invasive assessment. ASA can be performed safely and successfully in patients with coexisting LVOT obstruction and severe AS.