Minimally invasive procedures such as endovascular aneurysm repair (EVAR), transcatheter aortic valve implantation (TAVI) and implantation of mechanical circulatory support (MCS) are gaining ground on traditional surgery.1–3 These procedures require large-bore access, which is inherently associated with vascular complications and bleeding. Despite the reduction in size of these devices (Table 1), vascular- and bleeding complications are frequent and are reported as high as 20% in TAVI and 12–22% in EVAR.4–7 These adverse events lead to prolonged hospitalisation, the need for packed cell transfusion and an increased short and longer-term mortality.8 Common risk factors for access site complications are female sex, extremes of weight, renal insufficiency and anticoagulation use.9–10 This article focuses on strategies for femoral access and closure when using large-bore devices.

Good closure starts with good access. The ideal puncture site is located in the common femoral artery between the inferior border of the inferior epigastric artery (IEA) that marks the retroperitoneal space and above the femoral bifurcation. Punctures that are too high are non-compressible and are associated with retroperitoneal bleeding.11 Punctures below the femoral bifurcation, in a small calibre artery, are unsuitable for large-sized sheaths used in EVAR, TAVI and mechanical LV support and should not be closed with percutaneous closure devices per respective instructions for use. There are different strategies for obtaining peripheral access for large-bore devices.

When using anatomical landmarks, the operator identifies the inguinal ligament by connecting the anterior-superior iliac spine with the symphysis pubis. Under palpation of the femoral pulse, the needle is inserted into the common femoral artery just below the imaginary line of the inguinal ligament. This strategy is highly dependent on operator experience, which is dropping with increasing numbers of procedures performed via the radial artery – the so-called radial paradox.12,13 A retrospective study by Pitta et al. found that in approximately 13% of the cases, the actual access site was located outside the optimal location, when solely anatomical landmarks were used for puncture guidance. Access outside the target location was associated with more vascular complications.14

Ultrasound-guided access is performed using a linear ultrasound probe. The first step is to visualise the common femoral artery bifurcation in a longitudinal view to determine the exact bifurcation location and extent of arterial wall calcifications. The probe is then turned counter-clockwise to get a cross-sectional view of the femoral artery above the bifurcation. Vein and artery are distinguished by means of compression. The femoral artery is punctured under a 45° angle, the correct needle pathway and vessel entry is confirmed by ultrasound (Figure 1).

Ultrasound-guided access precludes radiation and is easy to apply after a steep learning curve. It provides a real-time image of the puncture site of interest. Ultrasound allows: 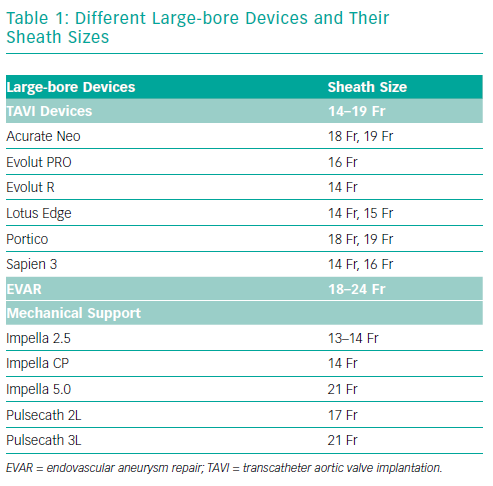 Compared with fluoroscopic guidance, ultrasound guidance reduces the number of attempts and median time to access.16

Fluoroscopic-guided access assumes a consistent spatial relationship between the common femoral artery and femoral head.17 Under X-ray, a radiopaque instrument, such as a haemostat or puncture needle, is placed over the femoral head to locate the appropriate height for puncture. Assumptions may be inaccurate in patients with high femoral bifurcations. Alternatively, a wire or (e.g. pigtail) catheter can be inserted from a contralateral access and navigated towards the level of the ipsilateral femoral head to serve as a target for the fluoroscopy-guided puncture. A small contrast injection through the pigtail catheter may further map the common femoral artery and serve as a bull’s eye for the operator. Fluoroscopy-guided arterial puncture is effective and associated with a low incidence of vascular complications, but it has not been shown to be superior to the use of anatomical landmarks.18–20 The major downside of this technique is its reliance on radiation, in particular to the operator’s hands.

In principle, a surgical suture technique is applied for closure after surgical cut-down for femoral access. Surgical cut-down and closure increases the chance for wound infection or iatrogeneous femoral nerve damage. At present, most TAVI and EVAR procedures are performed in a total percutaneous matter, but a surgical cut-down may still be preferred in selected patients, such as the very obese or those with femoral grafts or stents.25 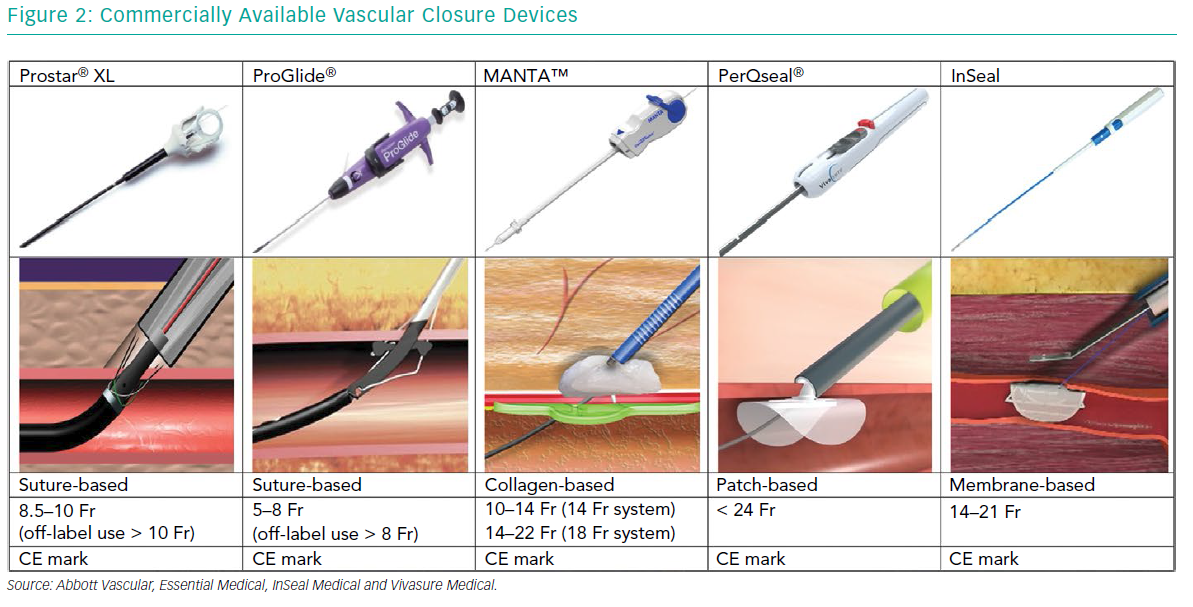 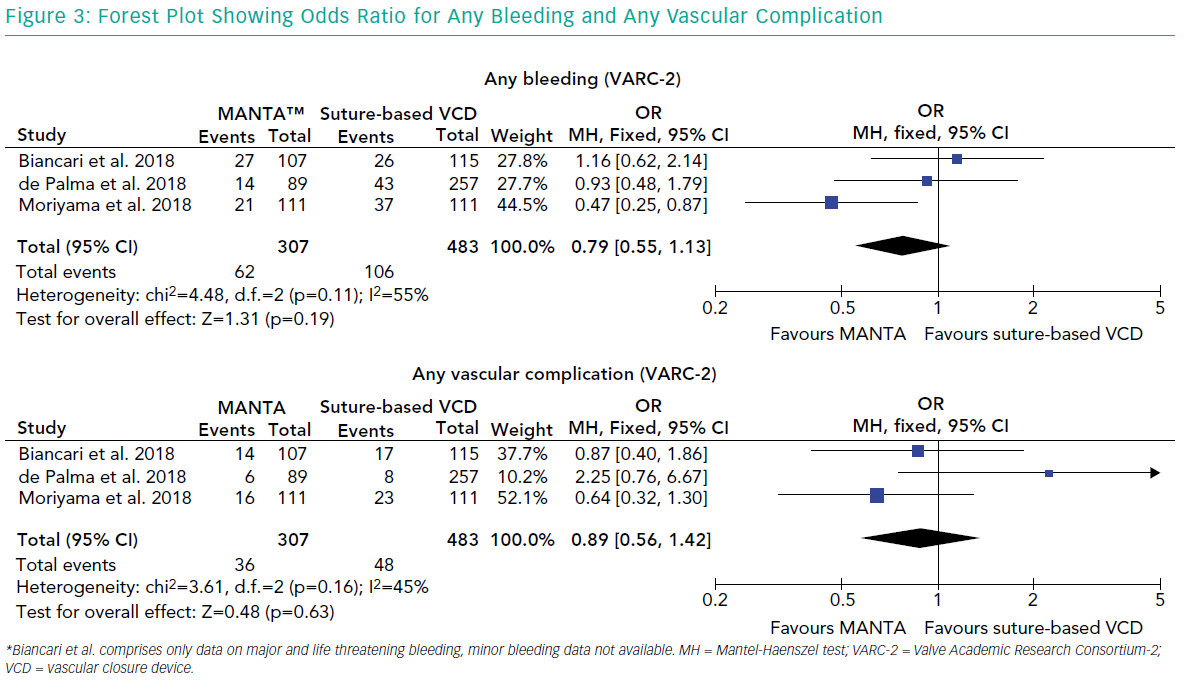 The Prostar XL device is inserted over a guidewire. Its position in the artery is confirmed when pulsatile flow evades the main tube of the device. Four pre-prepared sutures inside the device are pulled out while maintaining the device in the same position. This allows four needles to be pulled back, leaving the sutures in place. The arteriotomy can be closed by pulling the sutures and closing the knots.

The ProGlide technique typically requires two devices for large-bore arteriotomies. The devices are inserted before the procedure and are deployed at the 10 o’clock and 2 o’clock position. After the procedure is concluded, the introducer sheath is removed. The sutures are approximated and the vessel wall is closed.26 Both suture-based techniques can be executed with a safety wire in place in order to use additional suture- or plug-based closure devices if there is incomplete arteriotomy closure.

ProGlide was originally introduced to clinical practice for small-bore arteriotomy closure, but its use was extended to EVAR, first under surgical cut-down and later in a completely percutaneous fashion.27 Compared to surgical cut-down, there are fewer groin complications when using a VCD, and the procedural time is shorter (91 minutes ± 32 versus 153 minutes ± 112; p<0.05).28,29

A propensity matched analysis in TAVI patients by Barbash et al. showed lower rates of major vascular complications with use of ProGlide compared to Prostar XL (1.9% versus 7.4%; p<0.001) and lower rates of major (3.2% versus 16.7%; p<0.001) and minor bleedings (8.9% versus 13.6%; p=0.032).7 Conversely, a study in an Italian hospital reported more vascular complications with ProGlide versus Prostar XL closure (24.0% versus 11.4%; p=0.007).30 Basically, local experience will determine suture-based closure success and it is recommended that each operator or centre adopts and masters one suture-based technique.

Suture-based closure has also been successfully applied for closure of axillary and subclavian arteriotomies.31,32

The MANTA™ VCD (Essential Medical) is a collagen-based closure device (Figure 2). It consists of a poly-lactic coglycolic toggle within the artery, connected to a bovine collagen plug, exterior to the vessel wall. A stainless-steel lock is tampered down pushing the collagen and toggle together in order to sandwich the arterial puncture site between the toggle and the collagen. The proper amount of tension that the operator has to apply is indicated by the appearance of a green marker on the device handle. The toggle and collagen plug resolve completely in 6 months.33 The MANTA has a 14 Fr and 18 Fr version for arteriotomy closure between 10 and 14 Fr and 14 and 22 Fr, respectively, and obtained the CE mark in 2016. The MANTA has also been applied for completely percutaneous closure of axillary arteriotomies after TAVI.34,35

The InSeal VCD is a membrane-based device consisting of a self-expanding nitinol frame, a biodegradable membrane and a bioresorbable polyglycolic acid (PGA) tether. The InSeal device is introduced with the membrane in a collapsed configuration. The sheath is then pulled back and the release wire is pulled to deploy the VCD. The membrane is pushed against the arteriotomy site by the nitinol frame and traction is kept by keeping the tether fixed to the skin using a steristrip or suture. The flexible membrane should compensate for arterial wall irregularities and calcifications. The specially designed frame allows re-access within 26 weeks. The first in human experience showed technical and therapeutic success in all nine cases.40 Unpublished post CE mark clinical experience showed a mean time to haemostasis <1 minute and 0% Major VARC-2 vascular complications and 7.7% bleeding complications in a series of 52 patients.41

The PerQseal VCD consists of a flexible intravascular patch supported by a scaffold. The surface of the patch is textured to promote adherence to the vessel wall. An external locator extends through the arteriotomy, which keeps the patch in place. The implant is fully absorbable after 180 days. It received the CE mark in 2016. In 120 patients, from the unpublished Frontier series of studies, including TAVI, EVAR and thoracic endovascular aortic repair, no major vascular complications occurred.42

The use of large-bore arteriotomies is peaking with the expanding market of structural heart interventions and MCS. Indeed, catheter-based techniques, such as EVAR and TAVI have greatly replaced conventional surgical operations. Optimal access site management, including the proper puncture and arteriotomy closure technique, is pivotal to secure procedural safety and will ultimately determine the success of catheter-based therapies in clinical practice.