Dr Ishikawa is an assistant professor at Icahn School of Medicine at Mount Sinai, New York.

Dr Ishikawa's talk focused on his investigations into how left ventricular mechanical support affects left atrial haemodynamics. He recalled the common observation that following implantation of an Impella CP into the ventricle of a porcine model of myocardial infarction (MI), a dramatic reduction in left ventricular end diastolic pressure (LVEDP) is immediately seen. As flow is gradually increased, a further decrease in LVEDP follows. This led Dr Ishikawa to question how the unloading of the left ventricle would affect left atrium (LA) physiology, as the latter is closely linked to LVEDP. He investigated this by placing a pressurevolume catheter inside the LA through an atrial septostomy, and recording the effects of LV mechanical on atrial haemodynamics. In the same porcine model of MI, he observed a flow-dependent unloading of the LA (see Figure 1).1 A characteristic LA-PV loop was seen (see Figure 2), in which the left side of the loop represents atrial contraction, giving rise to atrial pressure and a simultaneous decrease in volume as blood is expelled. When the mitral valve (MV) closes, the LA relaxes and we can observe the passive filling phase of the chamber by blood flow from the pulmonary veins. When the LA is stiff, the slope of the pressure–volume relationship is steeper because the same amount of volume increase will lead to a higher increase in pressure. This slope may, therefore, be considered as an index of LA stiffness. In patients with cardiac disease leading to a less compliant myocardium, steeper slopes are observed (see Figure 2). 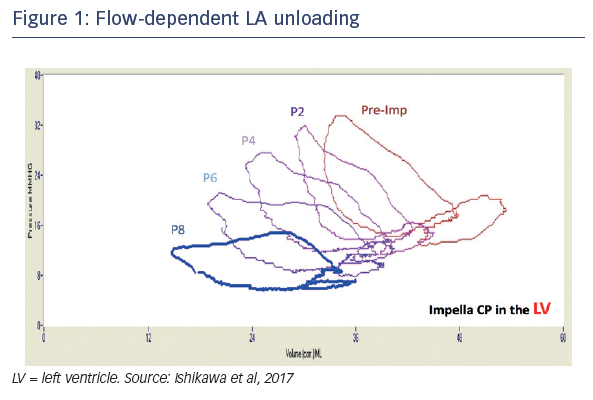 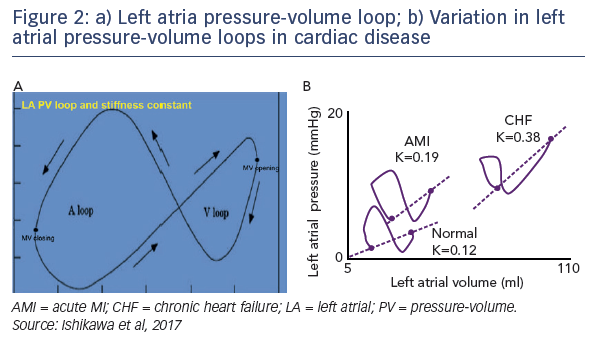 Dr Ishikawa compared the slopes of these atrial pressure-volume loops in the same pigs before and after Impella LV support. The steepness of the slope, and therefore LA stiffness, was significantly decreased after LV Impella support. During MI, LVEDP increases together with LA pressure. This stretches the LA, making it more difficult to expand. Dr Ishikawa highlighted the interdependence of LA haemodynamics on those of the LV. The observed reduction in LVEDP while on Impella supported correlated well with the LA pressure as well as maximal LA volume (see Figure 3). In terms of LA function, LA ejection fraction was improved when the Impella was supporting the LV. Importantly, this was not associated with an increased atrial load, indicated by reduction of LA atrial work and developed pressure (dp/dt max) when the Impella was in place.1 This suggested that atrial contraction was more efficient when the atrium was unloaded.

Since atrial stretch is a known mechanism for atrial arrhythmia, Dr Ishikawa’s team investigated whether the use of the Impella reduced arrhythmogenesis. Using pacing of the right atrium, atrial tachycardia or atrial fibrillation was induced in the majority (70 %), while not unloaded by the Impella. By supporting these same pigs with an Impella in the LV, the rate of atrial arrhythmia was reduced to only 30 % (see Figure 4). Furthermore, the duration of the arrhythmia events was found to correlate with the maximum LA volume, suggesting that LA stretch may play a key role in mediating the maintenance of atrial arrhythmias.1

Decreased LA pressure and volume with the Impella 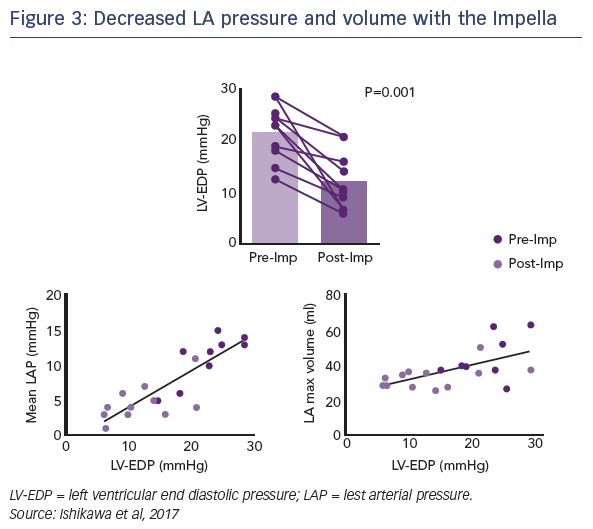 Download
Reduced arrhythmia inducibility and maintenance with the Impella 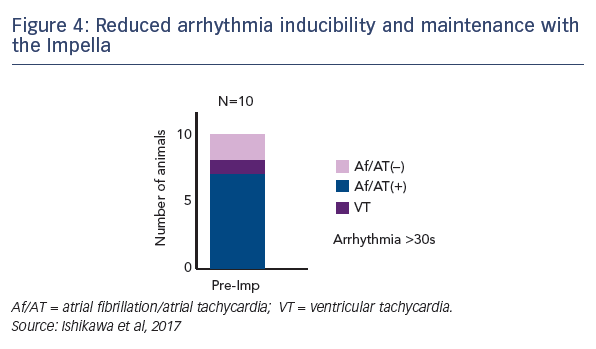 Dr Ishikawa’s team then explored the molecular mechanism underlying this effect. Earlier research found that stretching cardiomyocytes in vitro induces oxidative stress and increases spontaneous Ca2+ leak from the sarcoplasmic reticulum, which is a demonstrated arrhythmogenic trigger.2 Dr Ishikawa’s team therefore measured the expression level of nicotinamide adenine dinucleotide phosphate (NADPH) oxidase 2 (NOX2), a stretch-dependent source of reactive oxygen species. He found levels of NOX2 to be increased in the LA after MI compared with controls, but NOX2 levels were remained unaffected in those animals that underwent LV Impella support for 2 hours. He demonstrated that increased NOX2 levels were associated with increased phosphorylation the ryanodine receptor 2, the source of diastolic Ca2+ leak. This increased phosphorylation was not observed in atria supported with the Impella.

In conclusion, LV unloading with the Impella CP also significantly affects the haemodynamics of the upstream LA. Directly unloading the LV with mechanical support leads to passive unloading of the LA, reduces LA stretch, and inhibits atrial arrhythmogenesis by modulating stretch-dependent oxidative stress.