Bioresorbable scaffolds represent a promising new technology in the eld of percutaneous coronary interventions. The concept of the eventual resorption of the scaffold pertains to multiple theoretical advantages that may hold true particularly in bifurcation lesions - no permanent caging of the coronary artery, avoidance of acquired device malapposition and delayed hypersensitivity reactions, no permanent metallic stent protrusion in the main branch, etc. The worldwide experience with the use of bioresorbable scaffolds is limited. In our experience of selected bifurcation lesions, a provisional approach using one-scaffold has excellent results. Two-scaffold techniques appeared feasible. Our data support the exploration of the use of bioresorbable scaffolds in more challenging coronary substrates like bifurcations. Prospective registries and ideally randomised trials should assess whether the theoretical benets of bioresorbable vascular scaffolds (BVS) in bifurcation lesions can produce sustainable good clinical outcomes.

Since Andreas Gruentzig presented his pioneering work in 1977, 'three revolutions' in percutaneous coronary interventions (PCI) have characterised the field of interventional cardiology. Plain old balloon angioplasty (POBA) was refined by the introduction of bare metal stenting (BMS) (second revolution) to address the issue of acute vessel recoil and unacceptably high rates of restenosis. Drug-eluting stents (DES) (third revolution) further decimated the burden of target vessel revascularisation into the low single-digit figures. The bioresorbable scaffold technology such as the Absorb™ Bioresorbable Vascular Scaffold (Absorb BVS, Abbott Vascular, Santa Clara, California, US) may represent the fourth revolution in PCI as the implanted scaffolds provide transient vessel support and drug delivery, which is followed by substantial polymer degradation at two-years post-implantation, with a complete disappearance of the BVS strut 'footprint' in the vessel wall within a four year period.1 This concept precludes permanent caging of the coronary artery, may avoid persistent or acquired device malapposition and delayed hypersensitivity reactions to contemporary stent platforms and/ or drug polymers, which may solve the smouldering yet clinically devastating problem of late stent thrombosis.2

Flow-limiting atherosclerotic disease at bifurcations of coronary arteries, remain a challenging substrate for PCI. POBA in bifurcations was characterised by a relatively low success rate and a high incidence of restenosis.3,4 BMS improved acute procedural success yet was still associated with reserved long-term clinical outcomes irrespective of the applied stenting technique.5-11 Even in the DES era overall long-term clinical results in bifurcations seem suboptimal. The pathophysiology may appear paradoxical with both increased atherogenesis and restenosis at the ostium of the side branch but also delayed vascular healing and incomplete neointimal coverage making the side branch more vulnerable to (very) late stent thrombosis.12-15

Bioresorbable vascular scaffolds (BVS) may be interesting in bifurcation lesions as it precludes permanent side branch jailing after complete scaffold bioresorption. Okamura et al. recently described serially the appearance of a coronary artery side branch ostium after BVS implantation in the main vessel. At six-months the BVS struts were overhanging the side branch ostium but at two-year follow-up the struts proximal to the side branch were fully incorporated into the vessel wall and the struts located distally were replaced by asmooth membranous neocarina.

On the 1st September 2012, the BVS was commercially launched in the Netherlands. The Erasmus Medical Center immediately started with the BVS Expand Registry to prospectively follow up procedural and clinical data in a wider pallet of coronary lesions including bifurcations, chronic total occlusions and calcified lesions.16,19

Analogous to the mainstream bifurcation stenting paradigm, the provisional one-scaffold technique is considered the approach of first choice. One scaffold is implanted in the main vessel followed, if necessary, by balloon inflation of the side branch with or without final kissing balloon (see Figure 1). Okamura et al. illustrated balloon dilatation through the BVS cells and the appearance of the fenestrated scaffold20 in an in vitro model. Our group demonstrated the feasibility of BVS re-crossing into the side branch with a coronary guidewire and subsequent ballooning of the side branch ostium through the scaffold cells in vivo.21,22

Over a 10-month timeframe we treated approximately 60 patients with bifurcation lesions. We used a two-scaffold technique in three cases (two with a modified T-technique and one with the culotte technique). In one-third of cases the scaffold struts into the side branch was rewired and dilated. Procedural and acute clinical success was achieved in all cases and thus compares favourably to that with standard metallic stents. Specific adjustments to established bifurcation techniques were avoidance of simultaneous kissing balloon inflations and aggressive proximal optimisation techniques in order to avoid proximal scaffold damage. Furthermore we currently advocate a low threshold to confirm the final scaffold result by invasive imaging.

Two Scaffolds Strategy
Historically, a two-stent approach has never been demonstrated to be superior to the provisional approach. A more complex bifurcation lesion, especially with significant obstructive atherosclerosis in both the main branch and a >2.5 millimetres (mm) side branch (so-called Medina 1,1,1) may warrant a multiple device technique.

The culotte technique evolves with stenting one leg of the bifurcation, rewiring and ballooning into the other leg, followed by stenting of the uncovered branch through the first stent and completed with kissing balloon inflations. This translates into a proximal segment of the main vessel covered with two overlapping stents and in principle good coverage of the carina.23 The culotte technique fits best when there is only a limited sizing mismatch between the branches. Our group recently reported procedural feasibility of the culotte technique with BVS (see Figure 2).24 BVS can be appealing with this technique since over time the scaffolds will resorb, avoiding a permanent multilayer of metal in the coronary artery, leaving a smooth carina. This concept may virtually eliminate persistent device-malapposition or delayed healing at the side branch ostium, theoretically impacting on the incidence of thrombosis. Conversely, the implantation procedure per se could be hindered by the relatively high crossing profile of the BVS often requiring an optimal back-up guide catheter, highly supportive wires and a relatively aggressive preparation and dilatation of the bifurcation substrate and the initial scaffold.

The crush and mini-crush technique consists by design of crushing and deforming the proximal protruding segment of the side branch scaffold, followed by a second scaffold implantation. Afterwards the side branch needs to be rewired through three layers of cells to complete the technique with kissing balloon inflations. In the context of BVS the impact of crushing the polymeric polylactic acid struts is unknown; it is debatable in fact whether the crushing would be associated with intrinsic fractures that may jeopardise the overall scaffold integrity. In vitro observations are needed to fully evaluate the morphology and the integrity of the BVS after crushing. 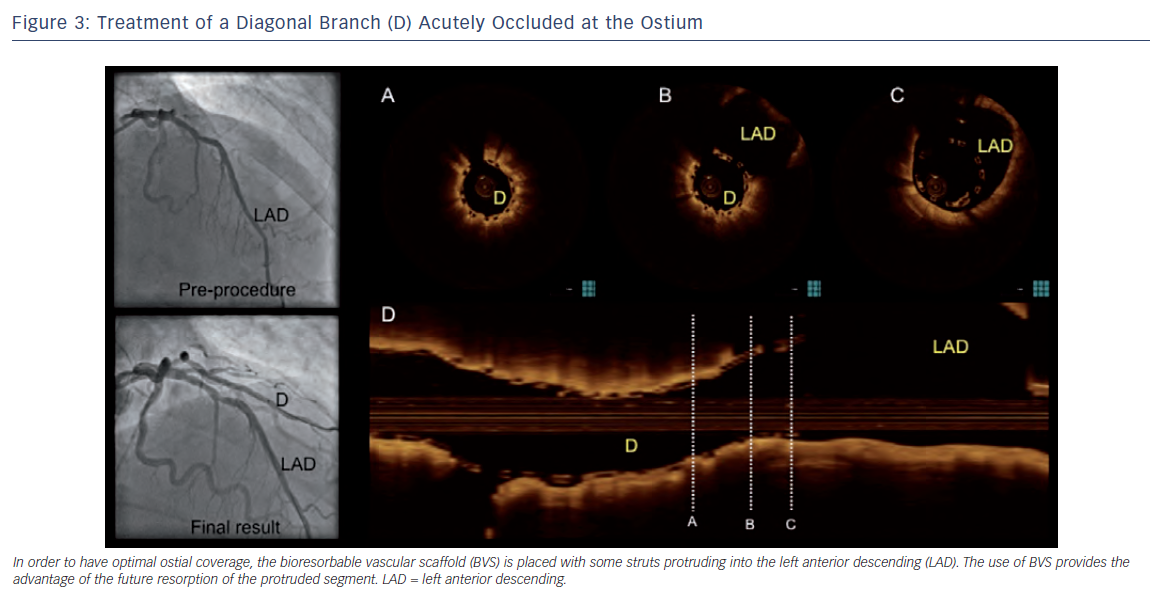 The V-technique implies the delivery and simultaneous implantation of two devices. One scaffold is advanced in the side branch, the other in the main branch forming a proximal carina.25 The V-technique is particularly suitable for bifurcations with medina classification 0,1,1. If correctly executed, struts will not jail the access to either of the two branches with no need for struts re-crossing. This can be an attractive aspect considering BVS with its higher profile and 150 micrometre (µm) strut thickness.

In a variable percentage (up to 30 %) of cases treated with a provisional approach a cross-over to a two-stent technique is required. The T-stenting and small protrusion (TAP) approach26,27 is a relatively new technique, ensuring complete coverage of the side branch ostium minimising stent overlap. Technically, the TAP technique is less challenging compared with reverse culotte and reverse crush, and is feasible in a variation of bifurcation angulations (at variance of reverse T-stenting that can only be optimally performed in bifurcations with 90° angulation). TAP technique may be challenging with BVS as re-crossing and dilatation of scaffold struts into the side branch are necessary. A potential disadvantage of the TAP technique is the presence of struts protruding into the main vessel lumen that occasionally impair laminar blood flow in the main vessel. Interestingly, in this setting, BVS may have the unique advantage of a complete coverage of the side branch ostium with an eventual complete disappearing of the protruding struts over time.

Finally, in ostial lesions (e.g. aorto-ostial, ostium left anterior descending lesions, ostium circumflex lesions and bifurcations medina 0,0,1) BVS can be an interesting product as complete ostium coverage can be achieved with only temporary strut protrusion into the aorta or main vessel (see Figure 3).

Conclusion
Bioresorbable vascular scaffolds may represent the fourth revolution in PCI. In particular coronary subsets BVS may represent a paradigm shift. So far, published data on BVS use in bifurcations is scarce. Our personal experience with a provisional approach as first choice shows favourable procedural and acute clinical success creating a window of opportunities to expand the use of BVS towards more challenging coronary substrates. Prospective registries and ideally randomised trials should assess whether the theoretical benefits of BVS in bifurcation lesions can produce sustainable good clinical outcomes.