Prof Møller opened his talk by emphasising the importance of understanding the whole concept of unloading the heart in a clinical setting, particularly in patients with cardiogenic shock (CS). Despite the urgent need for experimental research in the field of CS, there are limited options in large animal models enabling research using devices applied to human subjects. Since it is impossible to conduct controlled haemodynamic studies at the bedside in patients with CS undergoing mechanical circulatory support, Prof Møller’s team is developing an animal model that mimics severe CS after myocardial infarction. This aim of this model is to allow for detailed haemodynamic assessment of the CS state. However, inducing CS in large animal is associated with unacceptably high rates of premature mortality and the inability to acquire a complete data recoding. An ideal model would avoid this, would anatomically mimic humans, and would allow for the placement of a device percutaneously in the same manner as in the catherterisation laboratory.

Prof Møller’s work has focused on porcine models for the various size advantages they have compared to other animals. In particular, large porcine models allow for the placement of multiple catheters, enabling monitoring of the heart and peripheral perfusion. The induction of CS was based on an earlier model that involved the repeated injection of plastic microspheres into the left main coronary artery. In this model, this causes microembolisation in the coronary circulation and stepwise elevations of left ventricle end-diastolic pressure (LVEDP).1 The new model uses Contour embolisation particles, which are small and irregular flakes of polyvinyl alcohol 45–150 microns in diameter. Serial injections of these particles into the coronary circulation allows precise control of the degree of CS, ultimately producing increased lactate and severe LV failure (see Figure 1). Of note, induction of CS using this model was achieved in a study of 16 animals without the loss of a single animal. The pressure-volume loops from the LV confirmed the low pressurevolume area (PVA), demonstrating the severity of the CS. This model also allowed percutaneous placement of an extracorporeal membrane oxygenation (ECMO) cannula and an Impella CP® assist device, aiming to mimic conditions that would be used in the catheterisation laboratory. 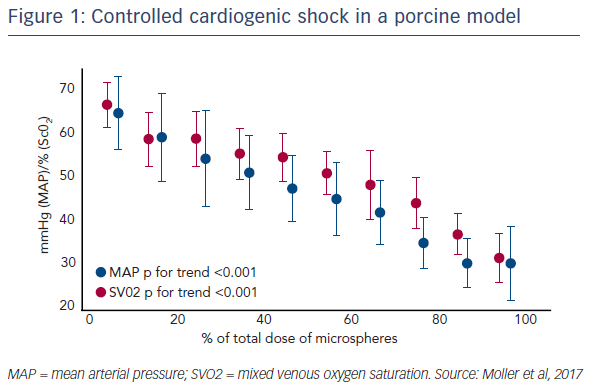 This model was employed in a study that aimed to compare active unloading with the Impella CP to VA-ECMO in large pigs with profound acute CS. The clinical endpoints were PVA, LVEDP and organ perfusion. Following the induction of profound CS, six pigs were treated with VA-ECMO, and six pigs treated with the Impella CP.2 As expected, the afterload was increased with ECMO, and the pressure-volume loop initially shifted rightward (reflecting increased myocardial work), but eventually resulted in a small leftward shift, likely reflecting the recovery of contractility while on support. In contrast, the Impella was found to provide almost full support immediately, giving partial unloading with low pulsatility, then the LV recovered. The PVA and LVEDP were significantly higher in CS pigs treated with the ECMO compared with Impella. Lactate was normalised in both groups. However, the ECMO-treated animals immediately restored renal perfusion, and this aspect was more efficient than the Impella.

In conclusion, this study confirms the ability of the Impella CP to unload the heart efficiently and effectively while providing increased tissue perfusion. However, ECMO is superior in restoring systemic perfusion in the acute stages of support. Chronic studies would be necessary to assess the effect of both platforms on restoring systemic perfusion relevant to the clinical setting.