As the treatment of acute myocardial infarction has evolved from conservative management to thrombolysis and, in more recent times, primary angioplasty, the incidence of ventricular rupture, in particular post-infarction ventricular septal defect (VSD), appears to have fallen. In this article we discuss the clinical presentation and investigation of post-infarction VSD, the natural history as well as surgical and percutaneous interventional management and outcomes. Very limited published information is available from small series reports with the inherent limitation of selection bias. Survival is clearly enhanced by surgical or percutaneous intervention. Overall outcomes remain suboptimal but do appear to be significantly better in the absence of cardiogenic shock and if the procedure can be deferred, factors which are clearly related. Further research is required in this difficult field.

Disclosure: The authors have no conflicts of interest to declare

Ventricular septal defects (VSDs) are well described and are a potentially fatal complication of myocardial infarction (MI). The original pathological description was by Latham in 1847. In the pre-thrombolysis era, VSDs were reported to occur in 1–2 % of MIs, while in the thrombolytic era this is reported to have fallen to rates of approximately 0.2–0.34 %.1,2 More recent data in the percutaneous intervention population are sparse, but the incidence of VSD in this group of patients appears to have reduced.2

The clinical presentation of post-MI VSD usually includes chest pain, shortness of breath and findings of low cardiac output. In up to 98 % of patients there is a new pansystolic murmur, which in almost 50 % is associated with a palpable thrill.3 Signs of right heart failure are more common than those of left heart failure and often chest radiographs may not show a significant amount of pulmonary venous hypertension.

Risk factors for post-MI VSD have been described. Patients developing this condition are more likely to be women (odds ratio [OR] 2.54), older (OR 2.05), have hypertension, be non-smokers, have an anterior MI (OR 3.15) and a worse Killip class at admission.1,4,5 They are also more likely (57 %) to have complete occlusion of the infarct-related artery.1 Most septal ruptures occur within the first four days after MI, but occurrences have been described up to 20 days following infarction.3

Once a VSD is clinically suspected, the mainstay of investigation is echocardiographic imaging. Patients are often very unwell and other imaging modalities such as cardiac magnetic resonance imaging and computed tomography are less appropriate as a first-line investigation. Doppler and two-dimensional echocardiographic imaging successfully identify the majority of post-MI VSDs. Occasionally transoesophageal imaging is required if transthoracic images are inadequate. Shunt calculations and assessment of a step up in blood oxygen saturation from the right atrium to the right ventricle are rarely necessary. Invasive angiography with ventriculography can also be used for diagnosis but is usually unnecessary unless percutaneous closure is being attempted.

VSDs are more commonly located in the anterior or apical portion of the ventricular septum (anterior infarction electrocardiographically), with the next most common location being the posterior portion of the septum (inferior infarction electrocardiographically). VSDs may be multiple and are commonly tortuous in their course through the septum. The size can vary from millimetres to several centimetres. Acute mitral regurgitation may co-exist with VSD due to papillary muscle ischaemia or infarction.

The mortality in patients developing VSD after MI is high. In the Global utilization of streptokinase and tissue plasminogen activator for occluded coronary arteries (GUSTO) trial, overall 30-day mortality was 74 % and one-year mortality 78 % in patients with VSD.1 In patients with VSD who were treated surgically, the 30-day mortality was 47 %, while in those treated medically, mortality rates as high as 94 % have been observed.1 Percutaneous closure of VSD is now being attempted with increasing frequency and the mortality associated with this approach is improving.6–8

The original surgical repair of a post-MI VSD was described in 1957 by Cooley et al. in a patient 11 weeks after MI who survived a further six weeks.9

Surgical repair is known to be complex due to the friable myocardium associated with the VSD and debate persists about the optimal time of intervention. Closure is still considered to be the treatment of choice due to the high mortality rates associated with medically managed VSDs. The current mortality rates for surgical closure range from 20 to 87 %,10–13 influenced by the location of the VSD (anterior versus inferior), the presence of cardiogenic shock, the time between MI and intervention, right ventricular impairment, co-morbidities and the severity of coronary disease. Surgically treated VSDs associated with inferior infarction have been reported as having a 69 % mortality compared with 22 % with anterior events; those with cardiogenic shock have an 88 % mortality versus 29 % in those without.14 Mortality associated with right ventricular dysfunction has been proposed to be a consequence of inferior MI.14,15

The American College of Cardiology/American Heart Association guidelines recommend insertion of an intra-aortic balloon pump and referral for urgent surgery,16 although some units have the policy of delaying the procedure for three to four weeks if possible to allow for scarring of the adjacent myocardium. The guideline recommendations reflect the fact that patients in whom surgery is delayed often decompensate and survival in patients operated on in cardiogenic shock is poor (27 versus 82 %).3 There have been descriptions of up to 80 % of patients with post-MI VSDs developing cardiogenic shock.3

Percutaneous closure of VSDs has been described in the congenital heart disease and ischaemic populations for a number of years. In 1988, Lock et al. reported six attempted closures of VSDs in a variety of patients.6 Of the three patients with post-MI VSDs, all died during their hospital stay. In these pioneering attempts, a Rashkind 17 mm double umbrella device was used.

Since this time, progress has been made with percutaneous approaches. Recently reported series have used the Amplatzer® VSD and atrial septal defect double-umbrella self-expandable nitinol device, with previous devices being the Clamshell double umbrella, the Rashkind double umbrella and the CardioSEAL® device. A total of 82 patients have been reported in the major case series since 2004.7,8,17–19

Percutaneous closure is usually performed under general anaesthesia with transoesophageal echo (TOE) and fluoroscopic guidance. A typical percutaneous closure procedure is described as follows. An initial left ventricular angiogram is performed to establish landmarks and guide the procedure. A right internal jugular (RIJ) sheath is inserted and intravenous heparin and antibiotics administered. A JR4 catheter is then advanced into the left ventricle and manipulated to the mouth of the VSD. A Glidewire® is passed through the VSD into the right ventricle and the catheter advanced over the wire. The Glidewire is then exchanged for a 260 or 400 cm Wholey™ wire which is advanced into the pulmonary artery where it is captured using a snare from the jugular vein sheath. The wire is then exteriorised resulting in a complete arterio-venous loop. The RIJ sheath is then removed and replaced with a 12 Fr AGA delivery sheath which was advanced across the VSD before the dilator is removed. The chosen device is then advanced through the sheath and deployed with fluoroscopic and TOE guidance.

The reported procedural failure rate is 11–20 %.7,8,17,18 Reasons for failure include failure to cross the VSD with a wire, tortuosity of the VSD, patient death before deployment and VSD too large for current devices. There have also been cases of late device dislodgement and endocarditis, both resulting in poor outcomes. Other reported complications include haemolysis, ventricular rupture and access site difficulties. Several series report cases of ventricular rupture resulting from manipulation of the catheter across the VSD. Current percutaneous techniques require a 6 Fr sheath in the femoral artery and a 12 Fr sheath in the internal jugular vein with the associated vascular risks.

Most percutaneous procedures do not completely abolish left to right shunting, although all report an improvement in patient symptoms and haemodynamics (see Figure 1). Published data quote a residual shunt in 44–86 % of cases at long-term follow-up.8,17–19 There is a significant rate of residual heart failure symptoms in all the published series, some of which may be related to ventricular impairment rather than persistent shunting. The data suggest rates of up to 100 % New York Heart Association class I and II symptoms after percutaneous closure.17

Holzer et al. reported on 18 patients, 89 % of whom had the device successfully deployed. The mortality was 41 % and a residual shunt was observed in 80 %, with 20 % having a large residual shunt; two patients underwent a second successful percutaneous intervention.18

As with the surgical approach, there is considerable debate about the best timing of an attempted percutaneous closure. There is a suggestion from the published series that later closure may be associated with better survival, but there are issues around selection bias. Patients who survive to undergo a later procedure are usually those who are not in cardiogenic shock.

Demkow et al. treated 11 patients, 10 of whom had successful device implantation. They noted that those patients treated during the acute phase of their infarction continued to have poor outcomes whilst those whose treatment occurred greater than three weeks after the acute event survived with clinical improvement in heart failure symptoms.17

Our own series was reported in 2008 involving five patients with post-MI VSD. The procedure was successful in four patients and the 12-month survival was 60 %. We found that the three patients who had their VSD closed more than two weeks after their MI were all alive at 12 months, whereas both patients who had early procedures died.8 Subsequent to our published series we have performed three further procedures. Of these, two patients survived through to 12 months and one patient required an additional surgical repair with mitral valve surgery nine days after the percutaneous intervention and remains well.

Patients presenting with shock are found to have inferior outcomes compared with those who are cardiovascularly stable. The four large series that report the presence or absence of shock include 63 patients. Of these, 32 patients had shock at the time of their procedure and the 30-day survival was 12 % (four patients). This compares with a 30-day survival of 52 % (16 patients) in patients without shock at the time of their procedure (see Figure 2).7,8,17,18

The largest series is reported by Thiele et al. involving 29 patients. These patients were divided into those with shock at the time of intervention and those without. The overall survival at 30 days was 35 %, dropping to 31 % at longer-term follow-up. There was a significant difference in survival between those presenting in shock and those haemodynamically stable (see Figure 3). In this series, VSDs were closed early with the intent that in this very unwell group of patients, a percutaneous option may be definitive but also could provide a bridge to surgery.7

There may be a role for a combined surgical and percutaneous approach. Ahmed et al. reported closure of residual VSDs following a surgical repair,8 whereas Thiele et al. reported patients undergoing percutaneous closures followed by later surgery.7 Both approaches demonstrate the difficulty in obtaining complete closure with either technique in the early phase, probably because of the friable tissue around the VSD and because the defect is developing and the final size is still unknown.

Post-MI VSDs remain a serious life-threatening complication. With improving acute treatments for ischaemia the incidence is small and appears to be reducing. Treatment options for this condition are difficult and limited. Surgical and percutaneous approaches still retain a significant mortality risk. Both procedures may play a role in the ongoing management of these patients, but further refinement is required. The optimal timing of treatment remains unclear, with guidelines recommending early intervention whereas published data suggest better outcomes with a delayed approach. The current literature is limited by the rarity of the complication and patient selection bias issues. Further work is required in this difficult field. 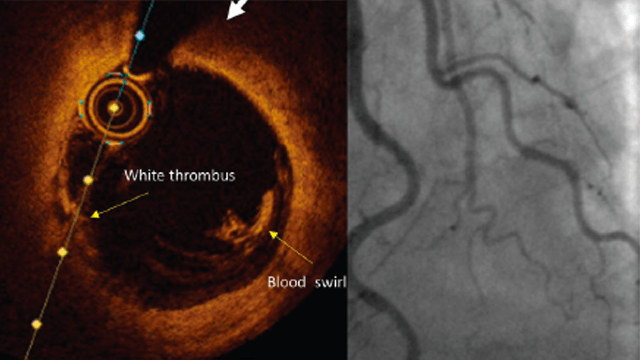 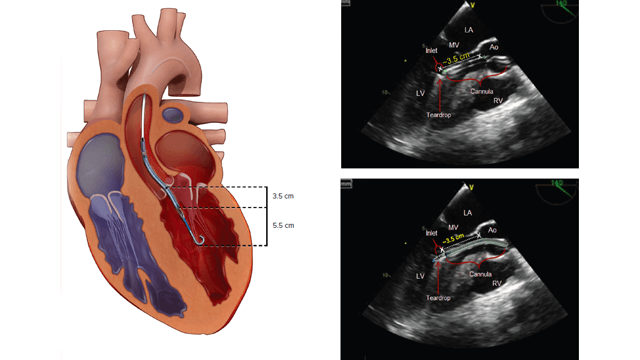 A Review of the Impella Devices
Read Article