Support:The development of this supplement was funded by Abiomed.

Dr Yancy opened his lecture by reviewing the American College of Cardiology (ACC)/American Heart Association (AHA) guideline for Stage D heart failure (HF) management.1 By the modern definition, HF is partitioned into various stages by the level of left ventricular ejection fraction (LVEF) exhibited.2 In particular, Dr Yancy aimed to illustrate how unloading the left ventricle (LV) can improve LVEF in HF with mid-range ejection fraction and HF with improved ejection fraction (HFimpEF). By definition, HFimpEF patients must have received guideline-directed medical therapy (GDMT) and subsequently improved LVEF at least 10 percentage points to ≥40% from a previously reduced baseline.3 This improvement is not thought to be a measurement phenomenon, but rather represents a distinct biological phenotype with corresponding clinical outcomes. As such, the new definition of HF accounts for the specific symptoms and signs of HF, and these symptoms and signs must be corroborated by either elevated natriuretic peptide levels, objective evidence of cardiogenic, pulmonary or systemic congestion or both.2 This altered definition, which provides quantifiable metrics for determining the stage of HF, changes the algorithm for the use of GDMT to include the concept of HF in remission.

Dr Yancy emphasised that patients with Stage D HF are a population with a number of unmet needs, including effective treatments to improve long-term survival (Figure 1).4 Current therapeutic options for select patients with advanced HF include heart transplant, mechanical circulatory support (MCS) as a bridge to transplant or bridge to candidacy and long-term MCS as destination therapy (DT). Dr Yancy highlighted that current ACC/AHA guidelines do not contain any Class I recommendations for the use of MCS in HF; however, there are several Class IIa recommendations in place. He noted the current evidence level in support of MCS is rated ‘B’; more robust data are needed to move that recommendation to Class I.

In order to achieve recovery in these patients, clinicians must focus not only on the macro effects of LV unloading, such as flow rate, or the incidence of complications, like thrombosis, but also study the micro effects of unloading. In particular, consideration must be given to the biological changes in myocytes, changes to the myocardial tissue and changes in circulating systemic markers.5 In a recent study, five HF patients with an LV assist device (LVAD) were analysed with pairwise tissue sampling at the time of LVAD implementation and LVAD removal at autopsy to compare proteomic and metabolomic alterations.6 The researchers found significantly decreased expression of genes associated with fibrosis, extracellular signal-regulated kinase 1/2 regulation and immune response at LVAD implantation, whereas the expression of genes associated with tissue regeneration, heart morphogenesis, vacuolar transplant and myocyte metabolism was significantly increased after ≥1 year of LVAD support (Figure 2). Of note, connexin-43, a gene involved in the development of gap junctions between cells, was among those significantly increased with LVAD support, and may be a marker of recovery. This was further supported by improved transverse tubule (t-tubule) histology, t-tubules being invaginations of the cell membrane critical to the process of excitation–contraction in cardiomyocytes. After LVAD, the t-tubules were observed to have structurally recovered, indicating the patient experienced restored biological function in the myocardium.6 Dr Yancy emphasised how using these types of analyses is more sophisticated and informative than a simplified list of clinical symptoms, and that examining these types of datasets can help more precisely refine study populations in future studies. 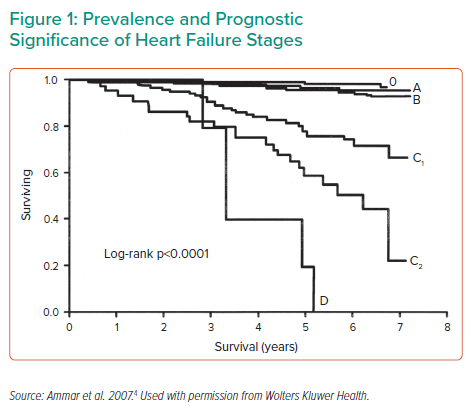 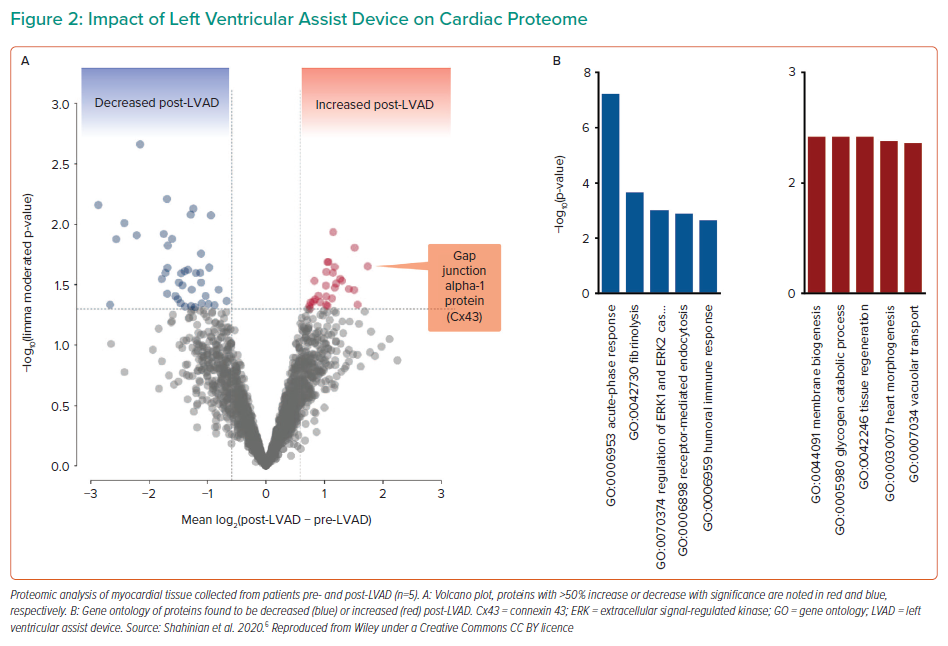 Although there is a paucity of large-scale randomised control trials (RCTs) on Impella and LVAD, Dr Yancy highlighted two ongoing trials that are addressing this issue. The Danish Cardiogenic Shock Trial (DanShock) aims to determine whether Impella provides a benefit in the context of acute myocardial infarction with cardiogenic shock (AMICS). Meanwhile, the Impella-supported PCI in High-Risk Patients with Complex Coronary Artery Disease and Reduced Left Ventricular Function (PROTECT IV) trial is of an adaptive design, investigating Impella use during high-risk percutaneous coronary intervention (PCI) in patients with reduced left-sided heart function. Dr Yancy also highlighted another trial that examined intramyocardial injection of mesenchymal precursor cells and subsequent temporary weaning from LVAD support in patients with advanced HF.7 Although no benefit was observed in that study, it still functioned as a proof of concept for combining device and biological interventions in clinical trials. Furthermore, data presented as supplementary material for that publication showed a signal that patients with ischaemic cardiomyopathy had better success rate than those with non-ischaemic disease, suggesting that recalibration of the patient population to target specific patients, such as that performed by Shahinian et al.,6 could reveal more information on this form of potential therapy.

The recent first pig-to-human heart transplant has also opened up further discussion on the subject of xenotransplantation. This concept comes with numerous crucial targets, including the prevention of hyperacute rejection, delayed xenograft rejection and the prevention of injection transmission.8 However, the long-term function of these xenotransplantations poses new questions, including whether the heart will adapt to cardiometabolic stress demands, whether sufficient graft tolerance will allow for reduced immunosuppression, how this transplant will compare to outcomes of human cardiac transplants and other support methods and whether there will be novel ethical considerations. A recent successful kidney xenotransplant into a brain-dead patient revealed the kidney could function normally, and was a successful proof of concept for future investigations and applications.9

Dr Yancy next discussed the hurdles to receiving endorsement for novel devices and tools from the ACC, AHA, Heart Failure Society of America and, ultimately, the Food and Drug Administration (FDA). The level of RCT evidence required for the highest class of recommendation (A) has decreased, whereas that for the second (B) class of evidence has increased and that for the third class (C) has markedly decreased.10 Thus, the bar for Class A is deliberately very high, and achieving these recommendations requires careful calibration of studies. Meanwhile, there are several paths to FDA approval, including: 510(k), which is the most common and involves an iterative process demonstrating that new devices are as safe and effective as prior approved devices; de novo, which is for innovative, lower-risk devices that are not comparable to pre-existing devices; and pre-market approval (PMA), which has the most stringent data requirements, is reserved for high-risk devices or when controls cannot be written and that usually uses performance to demonstrate safety and efficacy. To help researchers navigate these considerations, Dr Yancy provided insight from his 10 years at the FDA (Box 1). Dr Yancy stated that there must truly be an unmet need, and not simply a market opportunity, and there must be at least some historical or observation comparator data. In addition, although placebo-controlled data are the preferred standard, an alternative could be ‘objective performance criteria’ (OPC), which can be derived from previous case reports or data. The mode of analysis is also important, and a Bayesian analysis is the preference, as is an intention-to-treat population analysis rather than per-protocol analysis. Finally, as always, the therapy must be safe and reasonably effective. It is worth noting that currently there is no ventricular assist device that is both Class I recommended and FDA-approved via PMA. 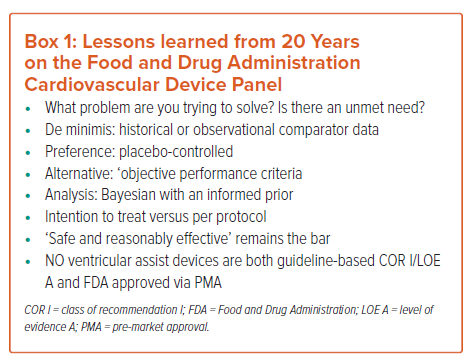 Dr Yancy proposed that as biological targets evolve and devices improve, the type, quality and precision of evidence should also evolve. Traditional forms of evidence, such as case reports/series, observation studies and phased trials, are slow and expensive, often with small numbers, hidden safety signals and bias. More contemporary forms of evidence, such as single-arm trials with OPC, Bayesian analyses and quality-of-life endpoints, are promising but unproven. The preference remains with RCT design, and the default endpoints remain morbidity and mortality. Dr Yancy anticipates that the future will include more genomic analyses, such as identification of at-risk phenotypes, treatment with induced pluripotent stem cells, gene therapy and genetic engineering. He foresees that data science, Mendelian randomisation, network meta-analyses, ‘n of 1’ trials, and bioengineering will be at the forefront. These tools may help better collate patient cohorts and speed the process of clinical trials. However, the costs, evidence requirements and implementations of these new frontiers and tools remain to be determined.

Dr Yancy concluded that although the need in the arena of unloading and improving LV performance is great, the science is actively evolving. Breakthroughs should come not just from MCS, but also from biology and genomics, and this will require new surrogate endpoints, including those related to quality of life, proteomics, metabolomics and genomics. Dr Yancy encouraged the exploration of radically new designs, noting that guideline endorsement and FDA approval are possible for new technology, but evidence is paramount.