Support:The development of this supplement was funded by Abiomed.

Ventricular unloading in the setting of MI has demonstrated promising results in preclinical settings, with improved perfusion and reduced infarct size. However, as studies progress towards clinical applications, there is a lack of data on the effects of device removal on outcomes. Maximising the therapeutic benefits of unloading requires evaluation of the effects of device explant and reloading. Using a porcine large animal model of ischaemia–reperfusion injury (IRI), Dr Mazurek hypothesised that acute support removal, or ‘acute reloading’, is detrimental to the heart, but gradually reducing support prior to device removal ameliorates the negative effects of reloading.

First, Dr Mazurek tested whether ‘acute reloading’ causes any damage in healthy hearts. In healthy adult pigs, pressure–volume (PV) loops were recorded at baseline and after acute reloading: that is, 2 hours of unloading with the Impella device at the maximum possible support level, then weaning off the device by stopping support in a single step. PV loops after acute reloading showed a rightward shift rather than a return to baseline, possibly suggesting decreased contractility with acute reloading in normal hearts (Figure 1). In support of this finding, key parameters of systolic function, such as cardiac output and maximum dP/dt, were decreased 2 hours after acute reloading. End-diastolic wall stress was also affected, demonstrating a significant increase 5 minutes after reloading. In addition, increases in the apoptotic markers caspase-3, p53 upregulated modulator of apoptosis (PUMA) and terminal deoxyribonucleotidyl transferase-mediated dUTP–digoxigenin nick end-labelling (TUNEL) staining demonstrated that cardiomyocyte apoptosis occurred with acute reloading.

With the potential harm of acute reloading established, Dr Mazurek tested the effect of reloading in the porcine IRI model. Following 90 minutes of left anterior descending artery occlusion, Impella support was initiated 30 minutes prior to reperfusion. Acute reloading involved simply stopping and explanting the Impella device after 90 minutes of support, whereas gradual reloading involved stepwise reloading where the Impella device settings were reduced by one P-level every 15 minutes prior to device explantation. All animals were allowed to recover for 1 week after explant and were then assessed for haemodynamics and tissue remodelling. In a heart with IRI, gradual reloading resulted in significantly higher cardiac output than in the acute group (Figure 2); ejection fraction, as well as circumferential and longitudinal strain, showed trends towards improvement. Both infarct size and no-reflow areas were reduced in the gradual reloading group compared with the acute group. 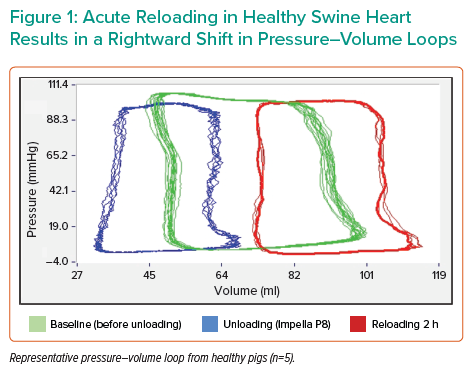 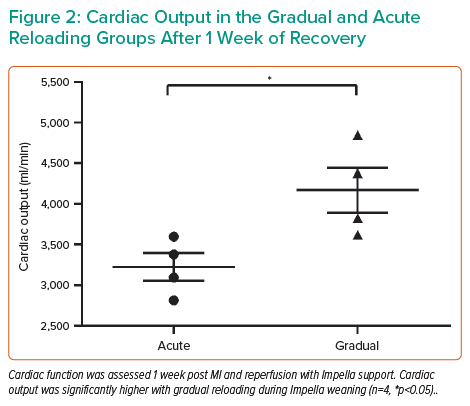 Dr Mazurek concluded that a strategy of gradually reducing mechanical support prior to device explantation ameliorates the negative effects of reloading, making the exit strategy an important consideration in the clinical setting.