Dr Burkhoff is an Associate Professor of Medicine at Columbia University, Division of Cardiology. He has authored more than 300 peerreviewed publications and is a world expert in heart failure, haemodynamics, and heart muscle mechanics. Dr Burkhoff is a founding member of the A-CURE Working Group and Co-Chair of the 2017 A-CURE Symposium.

Dr Burkhoff introduced the meeting by emphasising the need for consistent terminology in the field of acute cardiac unloading. The proposed definition of unloading is the reduction of total mechanical power expenditure of the ventricle, which correlates with reductions in myocardial oxygen consumption and haemodynamic forces that lead to ventricular remodelling.

The aim of myocardial unloading is twofold: first to achieve myocardial salvage and second to prevent heart failure (HF) and cardiac remodelling. It is important to recognise these as two distinct and important goals of acute cardiac unloading.

The benefits of left venticle (LV) unloading are well documented in both basic and clinical literature. Pharmacological unloading using captopril, an angiotensin-converting enzyme inhibitor, in an animal model of myocardial infarctino (MI) was first reported in 1985, and showed a shift in the end diastolic pressure.1 Following this initial study, the shift from basic to clinical research occurred rapidly. Clinical trials showed that, after anterior MI, ventricular dilation is progressive and that captropril may curtail the process, as well as reducing filling pressures and improving exercise tolerance.2

However, there are inherent limitations to pharmacological approaches to myocardial unloading. Unloading the LV and decreasing heart rate by these methods leads to a corresponding compromise in aortic pressure and cardiac output. Appropriate device-based therapies can overcome these limitations, as well as facilitating optimal use of other pharmacological or device-based therapies. These can have synergistic effects.

A 2003 study by Meyns et al. showed that by providing LV support using a catheter-mounted axial flow pump during the ischaemic period and during reperfusion the infarct size was reduced in animal models. Furthermore, oxygen demand during unloading is not an ‘allor- nothing’ phenomenon, but there is a dose-dependence; the more unloading is achieved, the more oxygen demand can be reduced during the ischaemic period and during reperfusion, and the more myocardial salvage can be achieved.3 Since the publication of this study, a growing body of literature has established the benefits of mechanical myocardial unloading,4–8 and has led to the increased clinical application of the technique.

The difference between myocardial unloading using drugs and devices can be demonstrated by examining the impact of LV-aorta (LV-Ao) assist devices on haemodynamics and energetics. An LV-Ao device takes blood directly from the LV to the aorta and maintains systemic and coronary perfusion pressures while simultaneously unloading the ventricle – a phenomenon known as LV-aortic pressure uncoupling. 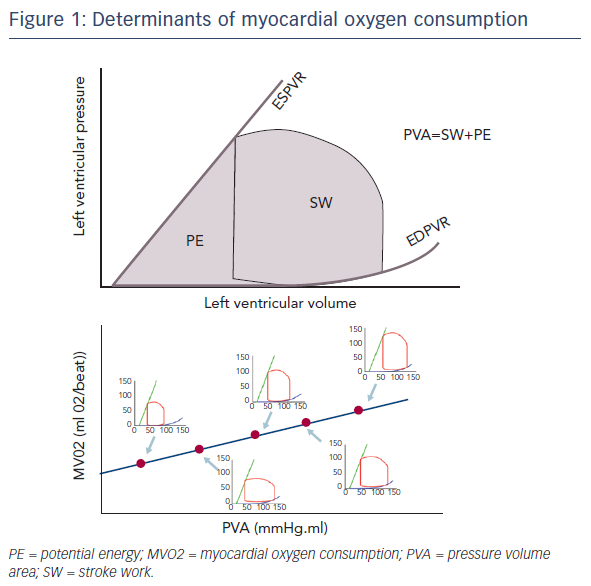 Uncoupling the LV from the systemic circulation minimises the mechanical work of the heart. This concept is the essence of the differences between drugs and devices and explains why devices are more effective than drugs alone in unloading the LV.

Dr Burkhoff emphasised that the determinants of myocardial oxygen consumption are not solely determined by the stroke work of the heart. This is important to remember when comparing different modes of mechanical circulatory support such as the left ventricular assist device (LVAD), which takes blood from the LV to the aorta and ECMO, which takes blood from the right atrium to the aorta. The oxygen consumption of the heart is linearly related to a parameter known as the pressure volume area (PVA) (see Figure 1). This is the sum of the stroke work and the potential energy, i.e. the energy that is stored in the myocardial filaments after contraction rather than being released as external work. It is also important to note that even when the heart is producing no external work, it still consumes energy, largely due to calcium cycling, but also due to basal metabolism. As drugs increase contractility, they increase oxygen consumption independent of the increased workload of the heart because of the increased energy requirement for calcium cycling.

The ‘dose-dependence’ of myocardial support and unloading 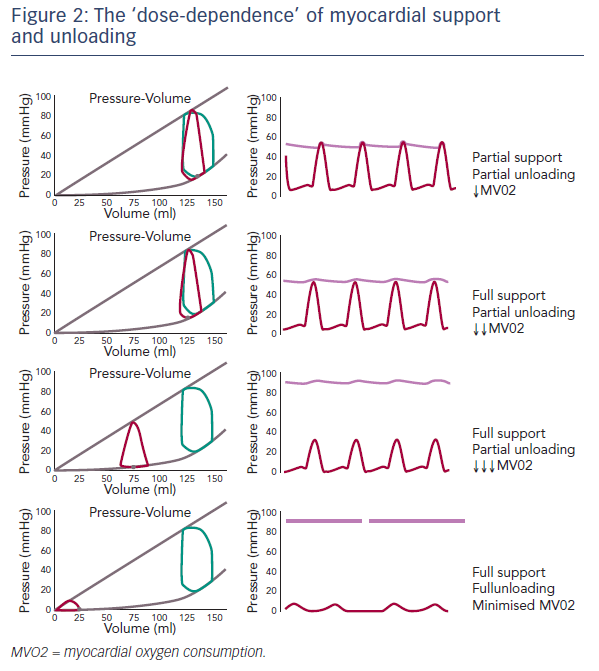 It is also important to understand that the effects of unloading are not restricted to the acute phase, and ventricular support has known consequences on ventricular remodelling associated with HF. Longterm mechanical unloading of the failing ventricle can, under certain conditions, lead to reverse remodelling, a restoration of a normal pressure-volume relationship in failing heart. Sustained unloading offers the potential for significant and sustained myocardial recovery through this reverse remodelling process; this was first reported in human hearts in 1996.9

Studies of LV unloading are still in their infancy but basic research is accelerating, and clinical studies are in their early stages. Therefore, Dr Burkhoff stressed the need to introduce consistency in the literature and into clinical studies, not only in terminology, but also in methodologies. We need to think critically of the methodologies that are being used, particularly in terms of measuring pressure-volume loops. It is difficult to compare studies that enrol different patient populations. It is also important to be consistent in the definition of clinical trial endpoints.

With respect to terminology, it is essential to understand the difference between support and unloading, and their dose-dependence (see Figure 2). Partial support and partial unloading occurs when the heart continues to provide some of the cardiac output while the device provides the remainder. This results in decreased myocardial oxygen demand and a small reduction in the PVA. In full support/partial unloading, the entire cardiac output is provided by the device, and there is still a volume cycle in the ventricle to generate some LV pressures throughout the cardiac cycle. In this scenario, the aortic pressure is uncoupled from ventricular function, and the pressure-volume loop shifts further leftwards and myocardial oxygen consumption is further decreased. Only when the ventricle is fully unloaded and the heart is performing zero work, i.e. during full support/full unloading, is myocardial oxygen consumption minimised. This shifts the pressurevolume relationship further leftward, almost obliterating the PVA. This emphasises the fact that unloading is dose-dependent and, in clinical practice, the flow rate of a device may have a different impact on different patients depending on their loading conditions that result from the use of the device.

In his closing remarks, Dr Burkhoff also highlighted the Training and Education in Advanced Cardiovascular Haemodynamics (TEACH) training initiative that aims to enhance the understanding of basic haemodynamic principles. This will involve two courses that will be held at Transcatheter Cardiovascular Therapeutics (TCT) Annual Meeting 2017 (www.tctmd.com, www.crfteach.com and www.pvloops.com).