A satellite symposium, sponsored by ACIST® Medical Systems, was held at EuroPCR 2016 to introduce new technologies in fractional flow reserve (FFR) and intravascular ultrasound (IVUS). FFR is the mainstay of functional haemodynamic assessment of coronary artery lesions, guiding decisions in percutaneous interventions (PCIs). The new RXi™ Rapid Exchange FFR system, featuring an ultra-thin monorail pressure microcatheter (Navvus®) has the potential to simplify PCI procedures as well as to allow the use of a workhorse coronary wire to facilitate both complex and routine FFR assessments. The system has been shown to be feasible and safe in everyday clinical practice and clinical studies. This session also introduced the first 60 MHz high definition (HDi™) IVUS system, which provides improved image quality over traditional IVUS systems, and is able to visualise bioresorbable vascular scaffold (BVS) without the need for contrast clearing.

Support:The publication of this article was supported by ACIST Medical Systems.

Dr Daemen began by describing the new ACIST RXi Rapid Exchange FFR system, which utilises an ultra-thin monorail pressure microcatheter (Navvus, ACIST Medical Systems) and is illustrated in Figure 1. This unique microcatheter allows the use of a guidewire of choice, and may facilitate negotiating complex anatomies, as well as allowing multiple pullback measurements while maintaining guidewire position.

The Navvus FFR to Reduce Contrast, Cost and Radiation (CONTRACT) study was an investigator-initiated, single-centre prospective, observational cohort study that aimed to assess whether the use of the RXi Rapid Exchange FFR device reduces cost, contrast and radiation compared with conventional wire-based FFR systems. The study enrolled all consecutive patients referred to the centre for coronary angiography or PCI and an indication to perform FFR at the discretion of the operator, between 1 September 2014 and 28 February 2015. Patients undergoing a procedure on odd dates (i.e. 1st, 3rd, 5th, etc.) were assigned to a conventional FFR system, while those on even dates (2nd, 4th, 6th, etc.) were assigned to the RXi Rapid Exchange FFR system (Navvus group). Of the 238 patients enrolled, 97 patients underwent FFR using the Navvus microcatheter. Of these, 15 patients required the use of two or more devices: in three cases the microcatheter did not cross the lesion, a device defect occurred in eight cases (a manufacturing issue that has since been resolved), the result was questioned in one and unclear in two. The remainder of the patients (n=141) were assigned to conventional FFR (cFFR): St Jude Medical Aeris™/Certus™ (n=120), Radi Medical (n=11) and Volcano Prime/ComboWire® (n=10). Of these, five patients required the use of two or more devices: one was due to a connection problem, two were due to a device defect, one because of unsterile equipment and one because the results were unclear. Final analyses were performed on the cohort in which only one device as used (82 in the Navvus group and 136 in the cFFR group).

There were no significant differences in baseline risk profile and procedural characteristics with the exception of a higher number of small vessels in the Navvus group. Multivessel disease was present in 52.4 % in the Navvus group versus 40.4 % in the cFFR group (p=0.09), leading to multivessel FFR in 22.0 versus 24.2 % (p=0.70) in both groups, respectively. Not including the cFFR wire, the mean number of additional guidewires used was higher in the Navvus group as compared with the cFFR group (2.5 ± 1.2 versus 2.0 ± 1.8, respectively; p=0.03). However, when disregarding the first wire needed to use the Navvus system, the average number of additional wires needed was lower when the Navvus system was used, namely 1.5 versus 2.0; p=0.02. 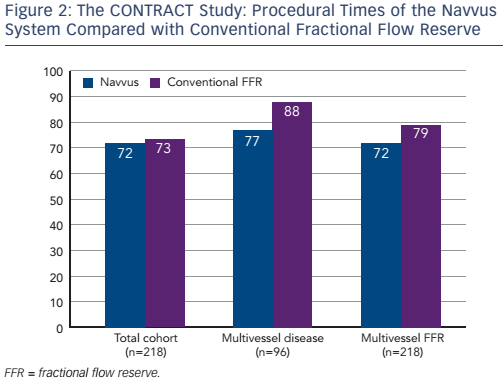 The investigators concluded that the RXi Navvus FFR system, as compared to conventional pressure wire-based FFR in daily clinical practice, was associated with comparable procedural costs, amounts of radiation and contrast used. A trend was seen to potential advantages in patients with multivessel disease or positive FFR, in which the use of the Navvus system was associated with lower costs, contrast and a shorter procedure time. The study had several limitations: it was a single-centre, non-randomised study with a limited number of patients. In addition, the final analyses were only performed in procedures in which only one device was used. The cost analyses based on local list prices and the potential specific technical advantages of the system were not assessed. Nevertheless, the results indicated that the use of the RXi Navvus FFR system is feasible and safe in everyday clinical practice.

The FFR-Stent Evaluated at Rotterdam Cardiology Hospital (SEARCH) Registry has recently commenced recruiting. This registry aims to determine the impact of FFR values post-PCI on long-term clinical outcomes in an all-comer PCI setting. An FFR assessment using the ACIST Navvus Rapid Exchange FFR microcatheter system will be performed after each PCI. The FFR value distal to the most distal stent and a pullback evaluation will be performed. The primary outcome measure is a composite of major adverse coronary events, including all-cause death, myocardial infarction (MI) and target vessel revascularisation (TVR) at 30-days and yearly up to 5 years. To date, 240 of an intended 1,000 patients have been recruited.