Is This the Prime Time for Transradial Access Left Ventricular Endomyocardial Biopsy?

Left ventricular endomyocardial biopsy (EMB) is an essential tool in the management of myocarditis and is conventionally performed via transfemoral access (TFA). Transradial access EMB (TRA-EMB) is a novel alternative and the authors sought to determine its safety and feasibility by conducting a systematic review of the literature. Medline was searched in 2020, and cohort demographics, procedural details and complications were extracted from selected studies. Four observational studies with a combined total of 496 procedures were included. TRA-EMB was most frequently performed with a sheathless MP1 guide catheter via the right radial artery. The most common complication was pericardial effusion (up to 11% in one study), but pericardial drainage for tamponade was rare (one reported case). Death and mitral valve damage have not been reported. TRA-EMB was successful in obtaining samples in 99% of reported procedures. The authors concluded that TRA-EMB is a safe and feasible alternative to TFA-EMB and the most common complication is uncomplicated pericardial effusion.

Data are available on request from the corresponding author. All authors take responsibility for all aspects of the reliability and freedom from bias of the data presented and their discussed interpretation.

LVEMB is conventionally undertaken via the transfemoral route but the radial artery has become the access route of choice for most coronary interventions and diagnostic procedures because it has lower complication rates, allows earlier mobilisation and reduces hospital stay.5,6 However, adoption of the transradial route for LVEMB has been slow, partly owing to the larger diameter catheters used to accommodate bioptomes.7–16 In recent years, more data are emerging demonstrating that the transradial route is not only safe but also allows the operator to collect sufficient specimens, as well as being less restrictive for patients.

The aim of this study was to systematically review the literature for the complications and feasibility of transradial access endomyocardial biopsy (TRA-EMB).

The systematic review was carried out in accordance with the Preferred Reporting Items for Systematic reviews and Meta-Analyses amendment (PRISMA) to the Quality of Reporting of Meta-analyses (QUOROM) statement and Cochrane Collaboration and Meta-analysis Of Observational Studies in Epidemiology (MOOSE) guidelines. The systematic review protocol was not registered. All authors read, critically appraised, provided feedback and approved the final manuscript. PubMed was searched, and the reference lists of reviews, letters and editorials were scrutinised for relevant material.

The Medline search strategy was: endomyocardial AND (radial OR transradial). Only articles in English were included for the analysis and relevant titles in other languages were recorded. The search was undertaken in November 2020. 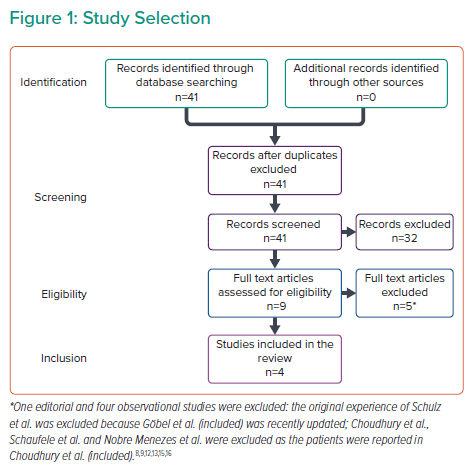 The initial literature search results were uploaded to EndNote (Clarivate Analytics), which was used to manage the retrieved abstracts.

The retrieved studies were independently reviewed at title and/or abstract level for inclusion and exclusion criteria. Full manuscripts were obtained for all reports meeting the inclusion criteria or when there was ambiguity. The full manuscripts were then reviewed to see if the inclusion criteria were met. A detailed study of authors, dates and locations was used to reduce redundancy. The reviewers were not blinded to the journal titles or to the study authors or institution. Reasons for exclusion were documented.

Data were extracted from the full-length manuscripts and transcribed to a spreadsheet (Excel, Microsoft). Demographic data and methodological characteristics were collected.

For each article, the name of the first author, year of publication, country of origin, number of centres included and study design were extracted. Patient variables, including the method of EMB were also retrieved. For each study, the following complications were extracted: bleeding requiring blood transfusion; pericardial effusion; cardiac tamponade requiring treatment; VF; cerebrovascular accident; crossover to transfemoral access (TFA); mitral valve injury; and death. Also retrieved were mean numbers of specimens obtained.

Synthesis of Results and Summary of Measures

The extracted data from each study were tabulated and presented descriptively.

A total of 41 articles fulfilled the search criteria in PubMed (Figure 1) and four observational studies were selected for the systematic review: Kherad et al., Choudhury et al., Tyler et al. and Göbel et al. (Table 1).11,13,14,16 The studies include mostly male patients in their fifth or sixth decade of life from Europe, North America and Japan.

Methodological Quality of the Studies

All reports used the same procedural technique albeit with different equipment. Briefly, once transradial access had been gained, a pigtail catheter was inserted into the guide catheter of choice and used to cross the aortic valve. Once in the left ventricle (LV), the guide catheter is advanced over the pigtail to the mid-LV cavity and the pigtail catheter is then removed. Guide catheter position is confirmed using fluoroscopy in orthogonal views. The bioptome is then used to take the tissue sample. Heparin is given during the procedure to prevent periprocedure strokes and radial artery occlusion. Most studies used sheathless MP1 guides with a wide variety of bioptomes (Table 1).

The most common complication was pericardial effusion, with an incidence of up to 11.1% in Göbel et al.16 However, the vast majority of these were transient and required no intervention. Tamponade requiring pericardiocentesis is uncommon, with a single case recorded by Tyler et al.14

Crossover to right femoral access was described in three out of the four studies, most commonly owing to access site complications, for example severe radial artery spasm or haematoma.13,14,16 Three patients out of the 496 reported cases crossed over to transfemoral access.

Only one occurrence of VF was reported; the patient was immediately cardioverted.9,16 Two patients developed procedure-related stroke but the level of disability is not reported.9,16 No occurrences of mitral valve injury or death were described in any of the studies.

Access site complications were reported in two studies. In Kherad et al., all patients had US Doppler of the radial artery performed 24 hours after the procedure, which showed occlusion in 50%.11 Two-thirds of patients with an occlusion had a ‘palpable radial pulse’ that was actually an ulnar pulsation transmitted via the palmar arch, but none required further intervention. Choudhury et al. reported mild to moderate radial artery spasm in 10% of patients.13

Studies Included in the Systematic Review 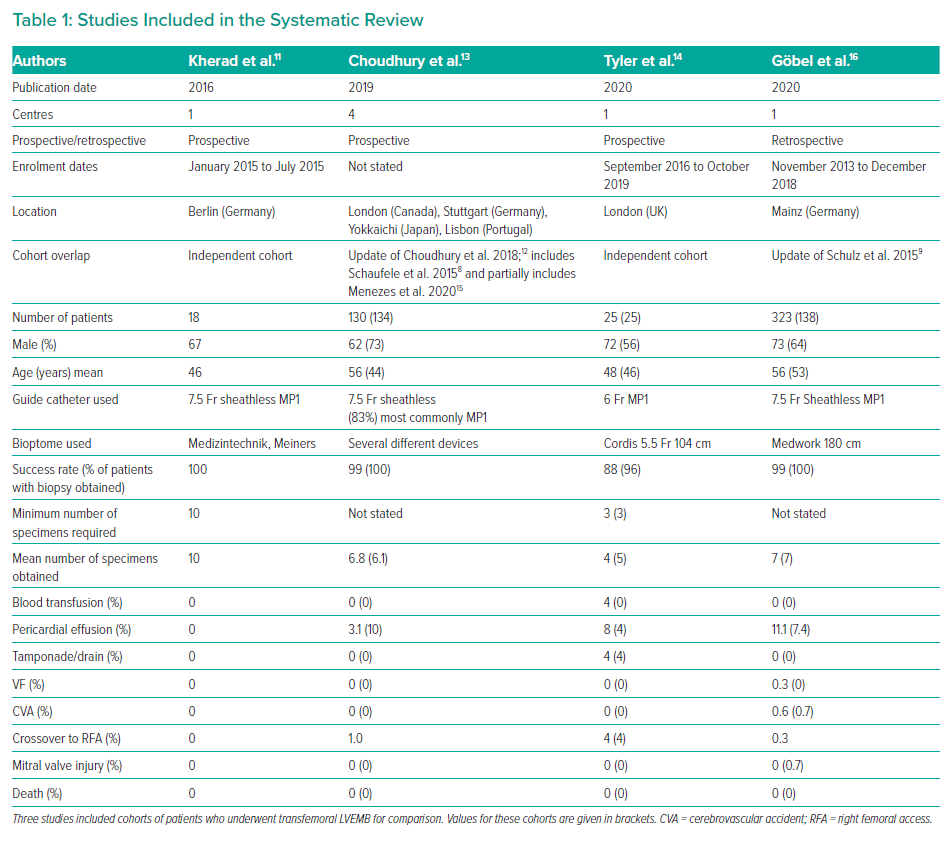 The mean number of specimens in each cohort ranged from four to 10. Samples were obtained in most patients, with procedural success ranging between 88% to 100% (Table 1).

This systematic review summarises the up-to-date global experience of TRA-EMB and demonstrates it is a feasible and safe alternative to TFA-EMB. The most common complication was pericardial effusion, which was managed conservatively in most cases. To date, procedural deaths and mitral valve injury have not been reported. TRA-EMB is a relatively new technique and the complication rates are expected to decline as experience increases. The data available for TRA-EMB were all derived from observational studies from multiple centres in Europe, Asia and North America. Assessment with the Joanna Briggs Institute critical appraisal tool demonstrated a low risk of bias but the indication for TRA-EMB was not clearly stated in the included studies.

The most frequent complication was pericardial effusion without tamponade. The variability in prevalence (0–11%) may relate to the different monitoring strategies used in each centre. Göbel et al. reported the highest incidence of pericardial effusion but all patients underwent echocardiography immediately and 24 hours after the procedure, increasing the chances of detecting a slowly developing effusion; other centres undertook only immediate post-procedural echocardiography.16 Other potential explanations for the high prevalence include the presence of a pre-procedure pericardial effusion and the retrospective nature of the study.

Other complications of TRA-EMB were less frequent. Göbel et al. was the only study where patients experienced procedure-related strokes, but the rate of stroke was comparable to that in the TFA-EMB cohort (0.6% for TRA-EMB versus 0.7% for TFA-EMB; p=0.884).16 No deaths have been reported due to complications arising from TRA-EMB and the one occurrence of VF was successfully treated.16 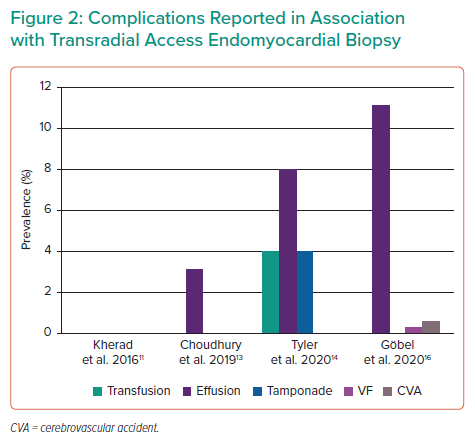 Almost all TRA-EMB procedures were undertaken via the RRA given the standard set-up of the equipment in the lab, especially in obese patients.20 However, the left radial artery has anatomical advantages as the left subclavian artery arises directly from the aorta making the path traversed by the catheters similar to the transfemoral approach.21,22 In addition, upper limb arteries are more tortuous on the right than the left side, especially in the elderly people and left radial access TRA-EMB may further improve the procedure.23

This study is limited by the small number of reported cases in the literature, which are derived from non-randomised studies.

TRA-EMB is a safe alternative to TFA-EMB. The most common complication is an uncomplicated pericardial effusion, which can be conservatively treated.